Brandon Vera faced some of the biggest names on the roster during his eight year stint with the UFC. He would go on to become the first, and to this date only, heavyweight title holder with ONE Championship and the Fil-Am fighter turns 42 in October.

Fans are entitled to wonder what Vera, who challenges Aung La Nsang for his light heavyweight title at ONE: ‘Century’, still feels he has to prove? But the man himself believes there is still a long way to go before his fighting days are done,

“I just feel that the work is not yet done. As a fighter, I don’t know when I’m going to retire. I want to get in as many titles and fights as I can before I get the feeling that I need to retire. I am still learning and improving,” Vera said.

Vera’s ONE Championship record stands at 4-0. Some fighters quit when they realize they have passed their prime, but that’s clearly not an issue for the 41 year old,

“I am relishing the opportunity that I was given by ONE Championship. As long as my body doesn’t tell me to stop, I will keep on pushing forward,” he said. When Vera does opt to walk away and call it a career it will be a permanent move. He has no intention of ever revoking the decision to retire,

“I want to be sure that I’m ready to retire. It really depends on my body and my mind, and what else I’m doing, what other things I have going in the works. When I do make that statement that I’m retired, I’m really retired,” he said.

However Vera is pleasantly surprised by his longevity and the fact he’s managed to squeeze a few extra years out of his fighting career,

“I told ONE Championship this when I first signed with them a few years back, that I’d like to retire from fighting when I’m 40. I am turning 42 this year (but) I am just not ready to call it off yet,” he stated. 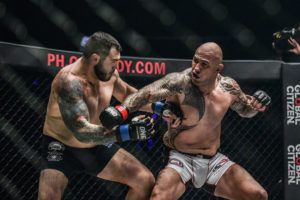 It is unusual for fighters to move down in weight towards the end of their careers. But Vera has been bouncing around between light heavyweight and heavyweight for over a decade now and is confident he will be on weight in time for ONE: ‘Century’,

“Cutting the weight is no problem but performing at that weight and having the energy and stamina have always been my problem. That’s why I began cutting weight earlier this year so I can start training on a heavy load in this weight class,” he said.

Vera has been a busy man since he moved to the Philippines a few years back. He starred in the hit movie BuyBust which premiered in cinemas last year, and is very vocal about possibly running for political office. 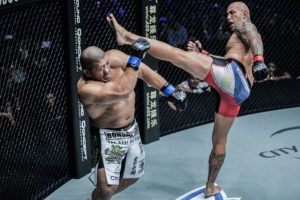 However, Vera is able to stay on top of his game amid his busy schedule because he listens and knows when it is time to focus on his preparation.

“I always make sure that I am 110% committed to what I do, I guess that’s my secret. In every bout, I just want to go in fully prepared, pushing the pace, and make them dance to my tune. My last fight (at ONE: ‘Conquest of Champions’) is an affirmation that I can still do it.”

For Vera, the ultimate goal is to go down in MMA history as one of the greatest competitors to ever set foot in the cage.

“I want to make history. I already did as the first Filipino heavyweight champion of the world. I am raising the bar by becoming the first Filipino to win world titles in two different weight classes in this sport. It’s my goal to become one of the best in the history of this sport. No one is going to stop me.”