When putting on your first combat sport event there’s a whole laundry list of things that can go wrong. Fighters missing weight or getting injured, sponsors pulling out and ticket sales proving slow are some of the common ones.

However, no-one from Strike Promotions in Brunei could have guessed just how badly their inaugural event would go wrong. The organization took to Facebook to describe how a fight in the crowd led to the abandonment of what was supposed to be a two day festival of martial arts:

The opening day featured a mixture of kickboxing and boxing matches at the Airport Mall in Bandar Seri Begawan. Multiple MMA matches were booked for day two with local star Adib Sulaiman on the cards.

However the event had to be abandoned after a brawl broke out between members of the audience on the Saturday. Footage was shared on Facebook and has been viewed by 74,000 people at the time of writing.

Sulaiman (1-1) has fought twice on the ONE Warrior Series event this year. He was scheduled to face Malaysia’s Mohd Rayyan and was deeply disappointed by the last minute cancellation,

(I am) very sad that I am unable to perform in my home soil ?? I have trained months in preparation for this fight and was looking to display my crafts on the stage for the world to see.

While Sulaiman will probably get another opportunity with ONE Warrior Series, the future of Strike Promotions looks a little less certain. It’s impossible for an organization to control how the audience behaves, but it seems the actions of one individual might have set the MMA scene in Brunei back by several years. 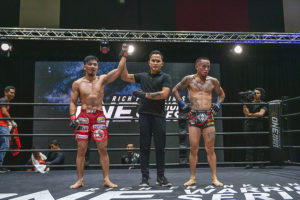 Lito Adiwang outlasts Anthony Do to earn ONE Championship contract