Lito Adiwang will be looking for his fifth straight win in Singapore on Monday. The Team Lakay prospect has been matched with Vietnamese American strawweight Anthony Do in the ONE Warrior Series 7 headliner.

Adiwang (8-2) is coming off first round stoppage wins at OWS 3 and OWS 4. He will be looking to follow in the footsteps of teammates Eduard Folayang, Kevin Belingon, Geje Eustaquio and Joshua Pacio by becoming a star with ONE Championship.

But he faces a tough test on Monday. The Filipino has been matched with Do (7-3) who is riding a three fight winning streak and coming off a stoppage win over Ryo Hatta at Pancrase 301. 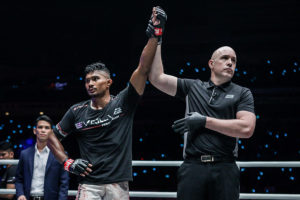