Captain was ahead going into the final round of the fight which headlined the True4u event at Rangsit Stadium. This was when controversy erupted with the referee and judges coming in for criticism from the crowd.

Captain wanted to control the ring and defend his lead at the start of the fifth round but got tied up in the clinch and lost his balance, allowing Nuenglanlek to land with a solid knee and then wrestle him down. 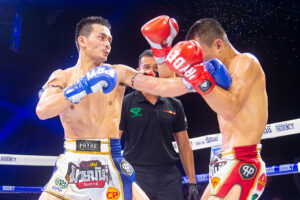 As the fighters were falling the referee stepped in to catch them both. This enraged Nuenglanlek ’s camp, who felt the referee was trying to help Captain and they told their fighter to stand off for the remainder of the round.

Plastic bottles were thrown into the ring as both fighters stood off and waited for the bell to sound, electing not to engage in the closing moments. The fight was scored a draw which did nothing to ease the tension.

Afterwards Captain’s manager, Nuttadaj Vachirarattanawong, suggested this might be the last time he fights in Thailand,

“I think in future we won’t have Captain fight on shows here and will concentrate on fights in ONE Championship. I felt for Captain too, as he worked very hard for this fight. I wanted to put on a fight that the fans here really wanted, but it ended up like this. I think it is better for Captain and for ONE if he sticks to fighting overseas now.” 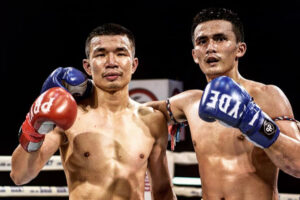 Captain also said that he preferred fighting for ONE Championship,

“Fighting on ONE is good as there isn’t the same pressure as fighting in Thailand and the crowd appreciate you more as a sports person. In Thailand there can be a lot of pressure especially if there is a lot of betting on the fights. It doesn’t really bother me though I never let the pressure get to me.”

His undefeated streak now stretches all the way back to 2018. During this period he has won the Lumpinee 154lbs title, the True4U 160lbs title and the True4U 140lbs title as well as the kickboxing belt with ONE Championship. 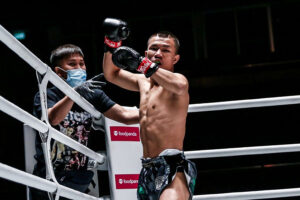 It represents a renaissance for a fighter whose career was on the downturn before he was surprisingly signed by Petchyindee. He has been in the Muay Thai wilderness, bloated in weight and fighting sporadically on the more entertainment orientated shows.

Since joining Petchyindee he has been through a dramatic transformation, dropping down from 73kgs to now compete anywhere between 63 and 65kgs. Nuenglanlek is one of the biggest names on the stadium scene and Captain was happy to showcase a different side to his game even if he didn’t get the win,

“My original style was a strong clinch and knee style. I want to show everyone my knees and see who has the better knee style. Nuenglanlek likes to hit with the knees to the sides, I prefer to stab in my knees through the middle. I think they are more effective and painful. Its a style of using knees you don’t see so much of nowadays.”