The K-1 veteran made his MMA debut at Rizin 26 but got finished with some ground and pound at the hands of Kyohei Hagiwara in the second round. Suzuki was coming off a unanimous decision win over Sora Yamamoto at Rizin Trigger 1st.

Suzuki cracked Hiramoto and left him stunned with a right cross in what was a frantic opening minute to the fight. The blow left the 23-year-old’s eye swollen. The Bellator veteran began to land some decent shots towards the end of the round. But it was Suzuki’s output that was looking more dangerous as he outlanded his opponent 40 to 23 in total strikes.

As the more experienced MMA fighter Suzuki elected to focus on his grappling in the second and third stanzas. He secured what would prove to be the only three takedowns of the contest and kept his opponent down for nearly three minutes.

Overall, the former Pancrase man looked more threatening and showcased a higher fight IQ across the board to take a clear cut decision win. With the victory Suzuki climbs to 7-3 but Hiramoto drops to 0-2. 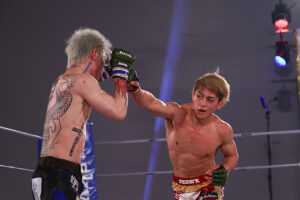 While the kickboxer’s career in MMA has got off to an an inauspicious start he has no intention of quitting. Speaking on social media the next morning he said,

“MMA, I can’t quit until I die. I really love it. I’ll play again this year. I’ll play hard this year. My power isn’t like this at all, I can definitely do it. Yesterday thank you for your support, I will fight again soon.”