Heili Alateng will be looking for his third victory inside the octagon when he takes on Gustavo Lopez at UFC Vegas 37.

‘The Mongolian Knight’ suffered a setback against Casey Kenney at UFC Fight Island 4 almost a year ago. A loss by unanimous decision snapped a two-fight winning streak and he’s determined to get back on track.

“I’m 100% ready for this fight and I have a big confidence for it,” Alateng told Asianmma.com.

He wants to improve on his last performance,

“For me this is a special fight because the last match it wasn’t really 100% a great performance. But for this, I’ll be 100% ready. I’ve already put in 2 months in the US and my coach Eddie Cha researched my opponent pretty well and I’m ready. Winning is everything,” he added. 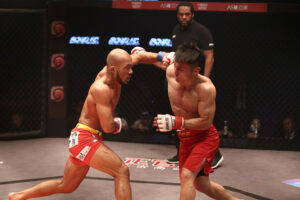 As well as boasting a pair of wins in the UFC against Danaa Batgerel and Ryan Benoit, the 29-year-old also has plenty of previous experience fighting some of the best bantamweights in Asia. He fought six times for Korea’s Road FC where his only loss came against Rizin star Kai Asakura.

The Japanese striker has often expressed his desire to fight for a big US organization, and Alateng would happily welcome him with a rematch in the UFC,

“If he comes to the UFC, then yes for sure. I can fight anybody in my weight class,” Alateng told Asianmma.com

Another loss that Alateng might seek to avenge came against Song Yadong in 2013. ‘The Kung Fu Monkey’ won a unanimous decision when the pair fought in Ruff, but Alateng believes he’ll only run it back with his countryman in the UFC if the timing is right, 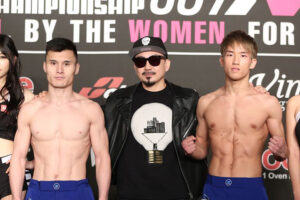 Before arriving in the UFC, Alateng strung together back-to-back knockout victories. If he manages to flatline his opponent on Saturday, it’ll be his first KO since 2018,

If he can get back to winning ways in Las Vegas this weekend then the Mongolian will be in a position to look towards the upper echelons of the bantamweight roster. There is one name in particular he has in mind,

“I respect Petr Yan, I think he is a strong fighter but I really want to fight with him.”