Not a good night for Asian fighters in Edmonton, Calgary, Canada at UFC 240.

First up on the prelims was South Korean prospect Choi Seung-Woo. The lanky striker faced off against Gavin Tucker and was again exposed for his lack of wrestling defense.

The story of the fight was the ability of Tucker to sneak in with the single leg takedown and clinch work. With this simple tactic, he was to control where the fight was dictated. Although Choi tried to stay on the outside to implement his Muay Thai arsenal, he never was able to get anything going even when he connected with some solid strikes.

Tucker spent most of the first two rounds in close range pressing Choi against the fence, utilizing the body lock and trips to keep his foe guessing. Midway through the second, Choi was hit with a illegal knee along the fence that forced referee Mark Goddard to take a point away from Tucker. Entering the third round, the scorecards were uncertain with the point deduction.

The Canadian started off the final round relentlessly attacking with the single leg but Choi was able to instantly pop up every time. Choi did complete a takedown of his own and tried to transition to the back but Tucker slipped out and reversed the position.

While Choi turtled up, Tucker jumped onto his back and inserted the hooks without any resistance. After flattening out his opponent, Tucker slid his arm under the neck and squeezed until the tap came.

After being sidelined for almost two years, Tucker (11-1) returned from suffering his first career loss against Rick Glenn and gets the first finish of his UFC tenure. Meanwhile, that setback makes it back to back losses for Choi (7-3) and keeps him winless since joining the promotion earlier this year. 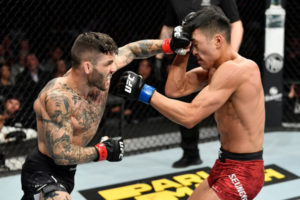 Immediately after Choi suffered his first submission loss of his career, Yoshinori Horie made his first appearance in the octagon and was knocked out in the waning moments of the third round by Hakeem Dawodu.

The Pancrase veteran had Dawodu confused throughout the first frame with his elusive footwork and bouncy attacks. Early on, Horie dropped Dawodu twice with a solid right counter and left hook that gave him the round.

However, Dawodu came out between rounds and made the adjustments needed to turn the tide. The Canadian started to cut off the cage with more consistently and sucked Horie into the clinch. While they were embraced, Dawodu slammed elbows to the head and knees to the body that had a crippling effect on Horie.

Then in the third round while Horie seemingly had slowed from the shots he took, Dawodu turned up the pressure and began to mix in the odd head kicks. Even though the Japanese showed his toughness after taking a barrage of strikes, his chin could not hold up and was collapsed by a kick to the jaw with less than a minute left.

Dawodu extends his current streak to three and climbs his record to 10-1 while Horie fails at his attempt to make a successful debut and drops his record to 8-2.

Christine Cyborg (21-2) returned in the co-main event and dismantled Felicia Spencer (7-1) with a three round beat down leading to a unanimous sweep on the judge’s scorecards.

The Brazilian legend gets back on track after being knocked out by Amanda Nunes and relinquishing her featherweight title. Spencer, on the other hand, tastes losing for the first time as a professional but shows that she will be a force to be reckoned with in the future.

The headliner was another technical display by the reigning featherweight champion Max Holloway. Throughout all twenty five minutes, Holloway used distance to his advantage to bloody and batter Frankie Edgar with an array of punches.

The unanimous decision makes it three straight successful titles defenses for Holloway (21-4) and 14 straight at 145lbs. Edgar (23-8-1) fails at his second attempt to capture the featherweight title and it is very unclear where his future lies.