2019 has been an eventful year for ONE Championship. Two Grand Prix tournaments, a slew of titles changing hands, and new trails blazed across the continent.

And if you were looking to dish out a promotional ‘Fighter of the Year’ award among all of that, it would be pretty difficult, almost impossible, to overlook newly crowned lightweight champion Christian Lee.

‘The Warrior’ has had a stellar 12 month stretch. It began in January with a savage first-round TKO against Edward Kelly. It went to another level in May, when he upset Japanese grappling legend Shinya Aoki to get his first taste of title glory.

To cap things off, Lee stepped in on just 10 days’ notice as an injury replacement to dominate highly-favoured prospect Saygid Arslanaliev in the final of ONE’s inaugural Lightweight Grand Prix, adding another belt to his collection.

Ironically enough, the winner of that tournament was to be awarded a title shot against the champion – which is, of course, himself.

Entering 2020, there’s almost little left to achieve for Lee, at least at that weight class, making his intentions to next step back down to the division where he began his professional career all the more understandable.

Not only does it present a chance to add another title to his name while he awaits for a new challenge to his lightweight strap, it doubles as a redemption mission.

“I feel like I have some unfinished business in the featherweight division,” said Lee.

“So, in the meantime, while I’m waiting for a lightweight contender, we could possibly see a world title match coming up in the featherweight division.” 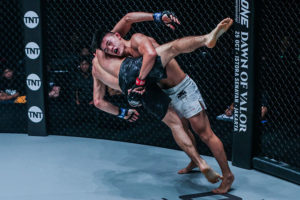 The only two legitimate losses of Lee’s professional career have been at featherweight, and both came against current champion Martin Nguyen.

“Right now, I’m in a spot where there’s no clear contender, because the winner of the Grand Prix was supposed to go on to fight the champ. With me winning that, there’s nobody. So, I’m just training my butt off, staying ready for whoever’s next, and I think I’ve got my eye on a third belt.”

Arslanaliev’s tear through the division, which included three consecutive first-round finishes, had many penciling his name in to secure the Grand Prix and be the next to step up to the plate.

The promotion sent out an SOS looking for a replacement fighter following an injury to Eddie Alvarez and Lee answered the call, escalated that particular process. At ONE: ‘Century’ part I the Russian’s hype train was brought to a sudden halt.

“It was great. As the champion, I should be ready to face anyone. That’s just how I feel a titleholder should be. So, 10 days notice I stepped in there and I derailed the number one contender and the guy I felt was the most dangerous contender, with all of his KOs. It was a big test and I’m happy I was able to overcome it.”

While clearly harbouring featherweight ambitions, Lee still sees plenty of potential opponents at lightweight. Among them the slew of fighters who were forced out of the Grand Prix.

“Everyone who was in the Grand Prix who didn’t lose but just got struck with injury would be up there. Ariel Sexton, Timofey Nastyukhin. Then you have Shinya Aoki who’s been on a win streak and Eddie Alvarez. Between those names I can see them fighting off, maybe another mini Grand Prix to see who’s ready for the belt.”

One prospect for 2020 that has Lee hugely enthused is ONE holding their debut event on US soil, a market they appear determined to breach.

The North American native has every intention of spearheading that charge and is already salivating at the chance of being part of the feature act.

“I am absolutely looking to be the first person to headline a card in the U.S.,” said Lee, who is also of Singaporean, Chinese, and Korean heritage.

Lee has proven popular in Singapore, the country of his father’s birth. But he is an American citizen and would love nothing more than to compete on a ONE Championship card there.

“I live in Hawaii. I’m a U.S. citizen and I’m proud to represent the U.S. and Singapore. You can represent whichever country you want to and I have roots in both places, so whether it’s Hawaii or New York City, I’d love to be the front runner for that.”

Until that time comes, you can be sure Lee will be putting in long hours at his family’s gym, United MMA in Waipio. With his world champion sister Angela Lee, brother in law and fellow ONE fighter Bruno Pucci, and head trainer/father Ken on hand, there’s no chance of any complacency setting in off the back of his landmark year.

“I can’t sit still. As soon as I come back from a fight, as soon as my body heals up I’m back in the gym. I’m teaching classes every single day, running the gym in Hawaii, and I’m just addicted to training. I love working hard and whatever comes next I’ll be ready. I’m just living the dream and training as hard as I can.”