Could you be the new Hasbulla Magomedav? Full Metal Dojo looking for fighting dwarfs!

A good dwarf can be hard to find. At least that is what Full Metal Dojo are discovering as they search for the new Hasbulla Magomedav.

FMD promoter Jon Nutt out out a call to any American dwarfs who might want to follow in the footsteps of the wildly popular Russian:

Hasbulla spends a lot more time pretending to fight than he does actually fighting. But that hasn’t stopped him from amassing  over 300,000 Instagram followers and he was reportedly offered $7 million USD to fight fellow small person Abdu Rozik.

Full Metal Dojo is looking to find the American Hasbulla, other nationalities might even be accepted. Do you know a dwarf looking to launch their combat career? Get in touch with Jon! 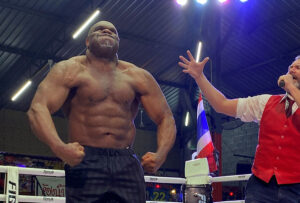