Davit Kiria faces Giorgio Petrosyan for the second time at ONE: ‘Fists of Fury’ this Friday. The circumstances are very different from the first fight but the Georgian knows he is going up against one of the best kickboxers in the world.

Kiria knows his opponent is a two time K-1 Max winner and won the inaugural ONE featherweight kickboxing Grand Prix. He can’t boast quite such an impressive collection of titles and tournament wins but thinks this makes him more hungry for success than Petrosyan,

“All respect to Giorgio, I respect all of my opponents, but I think I’m more hungry than he is. I would like to prove that I am one of the best fighters in this division, and I will prove it one more time.” 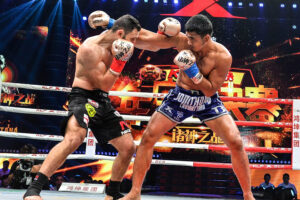 Kiria did win the Kunlun Fight World Max tournament in 2018 and is also a former Glory lightweight champion. These accomplishments all came in the years following his defeat to Petrosyan and the 33 year old says he is a completely different fighter now,

“When I first fought Giorgio, that was eight years ago and I was far less experienced than I am today. That was my first big championship tournament, and after that fight, I got a huge amount of experience.”

This will be Kiria’s first ever fight for ONE Championship and he is hoping to make a big impression on the global audience,

“You will see a guy going forward, working hard, and mixing kickboxing and karate styles. Nobody will ever be bored watching Davit Kiria, because Davit Kiria is putting 100% in the ring and going for the best performance, always.” 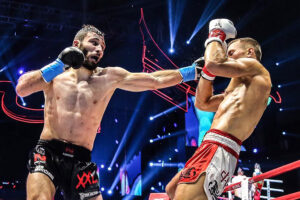 Taking a fan friendly approach is a priority for Kiria and he wants to get off to a fast start when he faces Petrosyan,

“They (the fans) will see a spectacular fight, they will see a very interesting fight, and they will see that when I come to the ring, I come to be number one. I wish and I hope there will be a lot of fans watching around the world, and I know people are going to love me in ONE Championship.”

ONE Championship has made some stellar signings in Kiria’s division. There has been speculation that another tournament will get underway this year, while the promotion has yet to crown its first featherweight kickboxing champion.

Kiria does not know what the future holds but says he is ‘ready for anything’,

“I’m ready for everything. I’m ready for any challenge. If the organization gives me this opportunity to fight for the world title, I will do it with pleasure. I don’t care if I get a super-fight again, a title fight, a Grand Prix. I want to prove I’m the best, and I’ll face anyone who will come against me.” Having already faced Petrosyan once Kiria is well aware of the task that awaits him this week. He has won his last four fights, winning the Kunlun Fight 70kgs tournament in the most recent.

The Georgian has a lot of momentum behind him but so does his opponent, who also won a tournament in 2019. It is a big challenge but Kiria says he is ready for it,

“I am ready for this challenge. I am grateful to be a part of ONE Championship and to face one of the greatest fighters of all time. It’s a rematch for me, it’s a debut for me, and I am very focused. I can’t wait for this.” 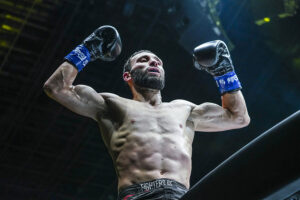