Eustaquio and Kim on standby for ONE Flyweight Grand Prix

Last month Ariel Sexton was forced to withdraw from the ONE Lightweight Grand Prix. Should any of the four fighters in the flyweight tournament suffer a similar fate a replacement will be on standby.

That’s because next week’s fight between Geje Eustaquio and Kyu Sung Kim at ONE: ‘Enter the Dragon’ has been designated as an alternate bout for the ongoing Flyweight Grand Prix. That means the winner will step in if one of the semi finalists gets injured.

None of the semi finals have been booked although the two matchups are both confirmed. Demetrious Johnson will face Tatsumitsu Wada in one final four bout while Kairat Akhmetov takes on Danny Kingad in the other.

Kingad and Eustaquio are training partners at Team Lakay. However this won’t be an issue unless Eustaquio wins next week and then Akhmetov subsequently withdraws with injury, a chain of events which is unlikely albeit not impossible.

The plan is for the flyweight and lightweight tournaments to conclude at ONE: ‘Century’ on October 13th. With such a short window of time replacements might be required and the winner of next Friday’s fight between Eustaquio and Kim will be waiting in the wings. 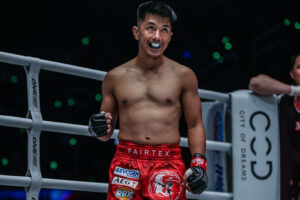