Fabio Pinca fully focused on MMA ahead of ONE: ‘No Surrender’ Part III

A highlight of the ONE: ‘No Surrender’ Part III card could well turn out to be the MMA debut of Muay Thai and kickboxing star Fabio Pinca. The French fighter faces experienced Thai featherweight Shannon Wiratchai.

Pinca has already established himself as a legend in Muay Thai with multiple world titles in his collection along. He was also the inaugural Thai Fight tournament winner and won a title at Rajadamnern Stadium.

This will be Pinca’s second fight for the promotion after he lost a point’s decision to Nong-O Gaiyanghaadao at ONE: ‘Heroes of Honor’ in 2018. The French fighter subsequently switched his attention to MMA and has been training at Tiger Muay Thai in Phuket. 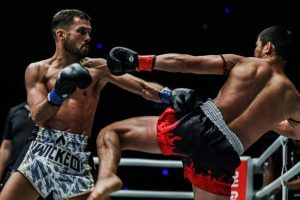 Pinca had  a fight in the pipeline before the Covid-19 pandemic struck. It has been a frustrating time for the French fighter,

“Actually, I was a bit disappointed that my fight in April was cancelled, but I didn’t lose my focus and was optimistic that things would go back to normal soon. I’m lucky to have a good team around me (at Tiger Muay Thai) and we never stopped training even when all the gyms were closed, we found a way to train every day. Three pieces of mat in a garden is enough to make us happy!”

After spending years at the top of the Muay Thai game, it can’t have been an easy decision to switch disciplines. Pinca spoke a little of his passion for the sport and how that has helped him adapt,

“If it was easy, it wouldn’t be fun! It’s really different, you have to adapt your style and learn a lot of new things with the ground game, but I love this game and I love to learn.” Being based at Tiger Muaythai in Phuket will no doubt have eased Pinca’s transition with the wealth of talent and knowledge there,

“I train hard as I always did in the past, twice a day, six days a week, but now I add a lot of wrestling and grappling into my routine. I have been working with all the MMA team at Tiger, especially with my friend Brendan Loughnane (PFL fighter) and Frank Hickman ( wrestling coach) while the gym was closed and I did a lot of sparring with Petr Yan while he was preparing for his UFC title shot against Jose Aldo.”

Pinca has seen a lot of Wiratchai already and is looking forward to testing himself against the Thai,

“I watched a lot of his fights, he’s good, I think he’s an experience MMA fighter and my plan is to beat him at his game!”

Pinca is fully focused on his MMA career but won’t  rule out a return to the stand up game,

“I am only focussed on MMA right now, I haven’t trained Muay Thai for a while now but if I get an offer for a shot at the ONE Championship world title in Muay Thai then why not?”

Pinca is not too bothered about who he fights and has one clear goal in his career ahead.

“I just want to fight all the best in my weight division and put on great show! My only goal now is to have as much fun as I can!” Elliot Compton hopes to overcome a legend with his unique style at ONE: ‘Big Bang’ Part II