ONE Championship veteran Shannon Wiratchai knew something had to change.

The Thai was coming to terms with his third-round submission loss to Iuri Lapicus at ONE: ‘Enter the Dragon’ and searching for answers as he processed the harsh realities that a gut-wrenching experience like a three-fight losing streak can conjure.

That was when a chance encounter with a fellow ONE fighter inspired a thought that was nothing short of an epiphany,

“I think when I really realized it was when I was in the locker room with Mark Abelardo from Fairtex,” Wiratchai recalled.

“And I was like, ‘well he’s my size in the off-season and I’m fighting at lightweight.’ I was shocked but that was like a call to me to go to featherweight.” After further discussions with his team, the 31-year-old realized that it may only have been an odd sense of pride that had been keeping him at lightweight since ONE Championship introduced hydration rules in 2017.

“I’m happy that I’ve been dealing with those people at lightweight – they’re so strong – but I don’t need to prove to anyone that I can stay around. I want to see where I can be at my best,” he explains.

“I was talking to my coaches and discussing it a lot, and my strength and conditioning coach said we could get my body fat percentage down quite easily.”

Wiratchai will put his new theory to the test for the first time this weekend, when he takes on Filipino Honorio Banario at ONE: ‘King of the Jungle’ in Singapore.

Coincidentally, Banario is also making a return to his more familiar weight class, where he began his tenure with ONE. The two know each other well from their time with the Asia-based promotion, literally all the way back to the beginning.

“We have both been in ONE for a long time. When I made my debut, he was on the same card,” he says.

“I’m sure we both thought we would be future opponents back then. We’re like friends now – it’s always a happy feeling when I see him and we share a similar kind of experience – but I’m excited to face him.

“He was the champion at featherweight and I saw fans saying to him, ‘Wow, you’re back to your first division, everything is going to be good.’ I just have to remind them that I’m getting back to my best division too, so it is going to be fun.” 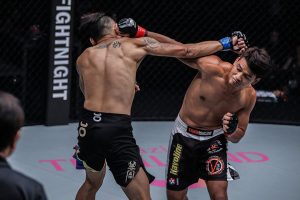 Funnily enough, Banario is also coming off a three-fight losing streak and will likely share the same sense of desperation as Wiratchai.

Wiratchai is well aware of where the strengths lie with fighters such as Banario, who train out of the world-renowned Team Lakay gym in Baguio City,

“They have that wushu style – more range-work, but not very accurate with punches compared to a boxer or Muay Thai fighter,” says Wiratchai.

“The side-kick is strong and it is going to be annoying to try to pass through, but I think compared to the other Team Lakay members, he has better boxing and good defense with his hands high because he has been knocked out before.” Wiratchai sees one area in which he is superior to Banario,

“I think the difference between us is we love to play the distance game, but they like to throw bombs when somebody gets in the range like a machine gun. For me, it is my accuracy – waiting to throw the right shot to get the knockout. It will be quality versus quantity.”

Once a fighter earmarked with title potential, Wiratchai is more focused than ever as he looks to prove he’s still deserving of such a tag. Having his hand raised against an opponent of Banario’s quality would be a serious statement,

“After I lost last time, I’ve been figuring out what I need to work on and fixing myself. I’ve worked harder and I’m feeling more focused than ever. I don’t want to waste all that time and all that hard work. I feel like all of my coaches and training partners have put everything into working with me, so I just want to make them proud.” 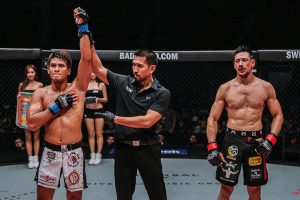 The Thai thinks making Banario backtrack will be key if Friday is to be the start of a comeback,

“I want to put pressure on him and keep pressing, and then take the finish if it’s there, but you never know.”

And Wiratchai will have to be at his best against the ultra-determined Banario, who is out to make his own statement at Singapore Indoor Stadium on Friday.

“I know that Shannon has prepared really well for this match,” said Banario. “And I am confident that my training is also not lacking, so this should be an all-out war.

“We are both looking to rebound, so we will see just who is hungrier to get that victory.”