The majority of live events in 2021 might have been audience free but there certainly wasn’t any shortage of drama. From Weili Zhang getting knocked out with a head kick to Demetrious Johnson being finished for the first time in his career Asian MMA made headlines all around the world this year.

Here are the five most shocking moments in Asian MMA this year:

Demetrious Johnson has never been finished in his career. The former UFC flyweight champion was regarded by many as being the greatest of all time and had been a strong favourite heading into his title bout with Adriano Moraes.

Moraes might have been the reigning ONE Championship flyweight king but few gave him a chance against DJ. But the Brazilian finished Johnson in devastating fashion with punches and knees putting away the former UFC flyweight champion and shocking the world.

Weili Zhang was riding a 21 fight winning streak into her strawweight title fight with Rose Namajunas at UFC 261. The fight was expected to be an even affair but it definitely did not pan out that way.

With a live audience in attendance for the first time in several months Zhang was viciously booed by the crowd in Jacksonville. Those boos turned to cheers when Namajunas knocked her out in 78 seconds, ending the Chinese fighter’s winning streak and snatching away her strawweight belt in the process. 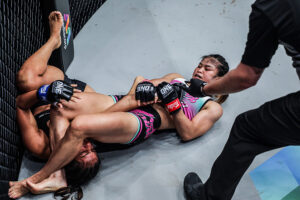 Stamp Fairtex and Ritu Phogat are both at a relatively early stage in their MMA careers. They both come from countries that haven’t traditionally been associated with the sport and faced off in the eagerly awaited ONE Championship Grand Prix final earlier this month.

It was a glimpse of the future as well as a clash between two of the top atomweights in the world. It was Stamp who prevailed and decisively so, her fight with Angela Lee looks likely to be one of the biggest Asian MMA moments of 2022.

Kyoji Horiguchi getting knocked out

Kyoji Horiguchi had been out of action all year after running down his Rizin contract and signing an exclusive deal with Bellator. So there was a lot of hype surrounding his second debut for the American promotion and he was handed an immediate title shot.

Everything seemed to be going according to plan for Horiguchi at Bellator 272. But in MMA things can change past and after nearly four rounds of total dominance the Japanese fighter walked into a spinning back first from Sergio Pettis and the rest is history.

The year served up a couple of controversial decisions and this was up there with the most shocking. Christian Lee appeared to have done enough to defend his lightweight title against Ok Rae Yoon at ONE: ‘Revolution’.

But two of the three judges saw it differently. One of ONE Championship’s biggest stars lost his title in controversial fashion and Yoon became the first Korean to win a belt with the promotion since Soo Chul Kim in 2013.