2019 was a busy year for ONE Championship’s flyweight division. The title changed hands and Demetrious Johnson emerged victorious in the promotion’s Grand Prix.

Geje Eustaquio might have lost his belt to Adriano Moraes. But the former champion is still excited by the prospect of seeing Johnson challenge the three time champion,

“It’s the match that everyone is talking about. We all want to see that fight to take place early next year. It’s the best fighting the best. It’s good for the sport because that’s what the fans want, and this fight will determine who’s the best in the division,” Eustaquio said.

Johnson is fresh from his unanimous decision victory over Eustaquio’s teammate Danny Kingad in the tournament finale of the flyweight Grand Prix at ONE: ‘Century’ Part I last October.

Meanwhile Moraes was last seen in action ONE: ‘Hero’s Ascent’ his past January when he put together a comprehensive grappling performance, defeating Eustaquio in their rubber match to recapture the strap.

Although Johnson remains as one of the top pound-for-pound fighters in the world today, Eustaquio believes that Moraes has what it takes to score an upset against the former UFC flyweight champion,

“If I am going to evaluate the fight, I think Adriano has the ability to beat the legend like Demetrious Johnson. Of course, Demetrious’ I.Q. in the ring or cage is outstanding. But If Adriano can take the pressure, he has a big chance to get the victory,” he stated.

However Johnson’s reputation precedes him and Eustaquio wonders whether this will affect the champion’s confidence,

“But the mere fact that he is going to face a renowned MMA superstar like Demetrious Johnson, sometimes it shakes the confidence of an athlete which affects the performance. Given that Adriano has the ability and talent, looking at the positive side, Adriano can still beat the legend,” he added.

Eustaquio feels that Moraes’ height could give Johnson problems,

“Adriano has to use the distance, that’s the advantage that I see on his part. He really has to use his height advantage. Obviously, he is the taller guy. But for him to be able to implement his physical advantages, he has to improve on his striking. I think it is the only piece missing in his arsenal in order to get the job done,” he explained. 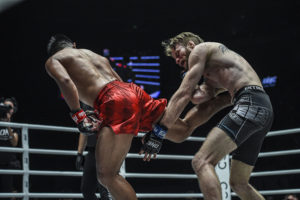 Eustaquio is coming off a win over Toni Tauru at ONE: ‘Masters of Fate’ and is hoping to work his way into contention for a third title shot,

“If he beats the champion, why not? If Moraes comes out on top and retains the title, I will still go for Moraes. The priority is to get the title back,” he declared.

With his sights set on another run at the title Eustaquio wants to be matched with a top ranked contender. He’s hoping for another shot at the belt in 2020 and hopes he can work his way into contention for a fight with the champion, whoever that may be,

“I will fight whenever, whoever and wherever. As long as it brings me back to the title that I lost, I will take it. I will not stop until I bring my title back to the mountains.”