Hexigetu might be small but he packs a mean punch. At least he thinks he does, the Chinese strawweight says he is going to knock out Lito Adiwang at ONE: ‘Revolution’ this week,

Hexigetu’s last three fights have all gone the distance but he has won them all. The 36 year old is on a winning streak and feels he is ‘a little better’ than Adiwang,

“Although he’s good, I’m fully prepared for his punches, his kicks, and his wrestling. I think I’m a little bit better at all of those than he is,” he said. A fourth straight win for the Chinese fighter could be enough to earn him a coveted spot in the top five at strawweight. For Hexigetu that is definitely the goal,

While he is confident of finishing Adiwang he does have respect for the Filipino,

“My opponent is a very good opponent (and) has the ability to finish people, whether by striking or by submission,. I respect him a lot, but I have also prepared in camp for him.” 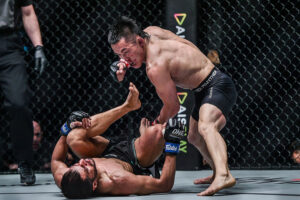 Hexigetu hasn’t lost a fight since 2017. With his last three bouts having gone the distance he has plenty of experience inside the ONE Championship cage.

A split decision win over former strawweight champion Dejdamrong Sor Amnuaysirichoke is the standout achievement on Hexigetu’s record. But after a year long absence he is determined to make a big impression this week,

“I feel very good ahead of this matchup. I feel very excited. I have prepared for a very long time for this fight, and I’m ready to do whatever the fans want me to do.”