Iman Barlow has has to wait a long time to make her ONE Championship debut. This is the second time she has travelled to Singapore, last time her opponent was forced to withdraw at the last minute due to Covid-19 protocols.

There have been no hitches ahead of this weeks fight with Daniela Lopez. The English fighter is just happy to finally get to compete at ONE: ‘Lights Out’ on Friday,

“It feels great to finally be fighting on ONE. I’ve done a few fight camps and been let down due to the pandemic more than once so I’m so ready just to get in there.” 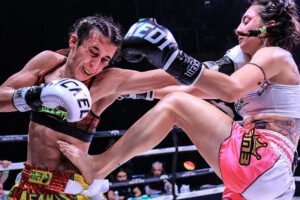 Iman knows a little of her opponent already and has put together a plan to take the win,

“I know she is very very tough. I have a few plans for the fight. Overload, movement, lots of body kicks. There’s a lot I’ve been practicing over the last two years and in the small gloves. Now it’s just time to put it all into place.”

Looking past her debut Iman knows exactly who she wants next and has a clear goal in mind.

“I’d like to fight Wondergirl or Supergirl. It’s been crazy watching everyone fight in my weight division before me, but before the pandemic I was due to fight straight for the title. So watching everyone fight and talk about that has been frustrating to watch when I haven’t been able to get one fight. I want to become the first ever ONE strawweight (Muay Thai) champion.” Iman has been fighting since a young age, with a huge amount of fights under her belt and a multitude of world titles in her collection. She still has a strong desire to compete though and revealed what keeps her focused.

“I’m always chasing a fight, wanting to get better and win. Training keeps me motivated in life and keeps me on track and sets a goal in my life. Sometimes in fight camp I have no time for anything else so it’s good to have a few weeks off and relax after. It’s all about balance!”

With all eyes on the special rules match between Rodtang Jitmuangnon and Demetrious Johnson on ONE: ‘X’, Iman spoke of whether she had ever thought of a switch to MMA and also gave her prediction for the fight.

“I’ve never really considered it. I really just prefer stand up that’s my passion. I couldn’t see myself going that way. It’s so hard to predict. If DJ survives round one then Rodtang will be in real trouble and get tapped out. So either Rodtang knocks him out in the first round or DJ wins by submission in the second.” 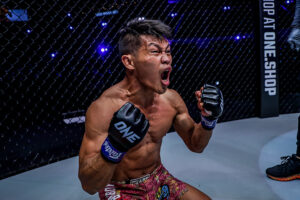