A welterweight fight has been added to the Deep 100 card. Daichi Abe will face Gota Yamashita in Tokyo on February 21st.

Abe (8-4) is a former welterweight King of Pancrase. After unsuccessful spells with the UFC and ONE Championship he is coming off back to back wins at Deep 95 and Deep 98.

Yamashita (15-10-1) is coming off a split decision defeat to Ryuichiro Sumimura at Rizin 25. Like his opponent he is a former welterweight King of Pancrase and he has also held the Gladiator 170lbs strap.

Also added to the card this week was a flyweight bout pitting Tomohiro Adaniya (15-13-3) against Takashi Matsuba (12-3-1). The latter is the Grachan 125lbs champion and is riding a four fight winning streak.

Headlining this historic card is a lightweight bout between Satoka Kitaoka and Juri Ohara. The event is set for TDC Hall on February 21st and will serve as a celebration of the promotion’s 20th anniversary.

Meanwhile featherweight champion Juntaro Ushiku will be back in action at Deep 100. He faces Daisuke Nakamura in a non title fight.

The event will take place in front of a limited live audience although restrictions could get tighter if the Covid-19 situation in Japan continues to deteriorate. 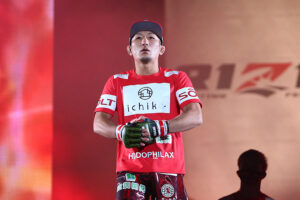