Iuri Lapicus is the next man in line for a shot at ONE lightweight champion Christian Lee. While the coronavirus, or Covid-19, pandemic has rendered the timeline of this title fight uncertain he remains confident the belt will soon be his.

Lapicus earned his lightweight title shot back in February after beating former featherweight champ Marat Gafurov at ONE: ‘Warrior’s Code’ in Jakarta. The Milan based Moldovan ended up winning this fight with a first round rear naked choke, his opponent’s signature move.

He admits the significance of this career-changing win took some time to set in.

“At first I didn’t even realize I won,” Lapicus said, looking back on the Gafurov fight.

“The next day I woke up and the feeling was simply amazing. The victory was my reward for all the hard work, dedication and love I put into this sport.” 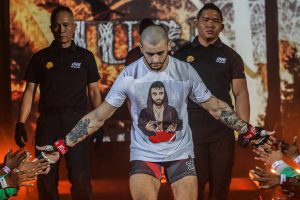 Not long after Lapicus defeated Gafurov, ONE Championship announced that he would be getting the next crack at the title currently guarded by Lee. The Moldovan says he knew going into that fight that the stakes were high,

“I knew that Gafurov had a huge price on his head,” Lapicus said.

“I knew that if I beat him there would be a big chance for a title shot.”

Lapicus and Lee were originally scheduled to meet at ONE: ‘Infinity’ on May 29th in Manila. Unfortunately, that event has been postponed due to the pandemic.

At the moment, it’s not clear when the title fight will happen, but Lapicus likes his chances against Lee. He feels the champion has some holes in his game,

“If I press the right buttons, I think I can have a big advantage,” Lapicus said.

“I am studying his fights and he makes a lot of small errors. I have to bully him and show all of my physicality. His wrestling skills are without a doubt his biggest asset but I think that from the physical point of view I can be a real nightmare for him. I need to use all of my physicality.” 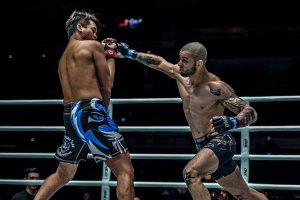 Winning the ONE lightweight title would mean everything for Lapicus, as it would establish him as one of the best fighters in the world. Yet he is also determined to win gold for the countries he represents.

Italy, his adopted home, has endured immeasurable tragedy throughout the pandemic, and could certainly use something to celebrate,

“It would mean a lot to me,” Lapicus said.

Moldova is not known for producing fighters and Lapicus senses an opportunity to make history,

“I would be also the first Moldovan athlete to win a world title in MMA and that is something that would make me and my whole family incredibly proud.”

If Lapicus is able to swipe the ONE lightweight belt from the waist of Lee, he can look ahead to challenges from dangerous contenders like Timofey Nastyukhin, Pieter Buist, Eddie Alvarez and Shinya Aoki. For the moment, however, his focus is firmly on the champion,

“When you’re preparing for a title shot, there’s no tomorrow,” he insisted. “I am focused 100% on the battle with Lee, then I will think about the next opponents.”

With the timing of his fight with Lee uncertain, Lapicus is keeping his head down and training as best he can under the circumstances,

“I love this sport and my goal is to be the best,” he said.

“To be the best you have to compete with the best, so that really drives me to do my best everyday in the gym, so I can show the world my value as a fighter.”

Lapicus’ two ONE Championship bouts have lasted a grand total of four minutes and 17 seconds. He has won all 14 of his professional fights and never once left it in the hands of the judges.

So whatever happens when he finally does fight Lee, the 24 year old expects it to happen fast,