Next week Janet Todd will compete for the first time since winning a ONE Championship title. Her atomweight kickboxing title won’t be on the line but she isn’t exactly taking a step into the unknown.

Todd will be returning to her Muay Thai roots when she faces Alma Juniku at ONE: ‘Fists of Fury’ Part III which is being broadcast on delay next Friday. It is a sport the American feels very comfortable competing in,

“Muay Thai is where I first started, so going back to it and being able to work in elbows and clinching again is something that I’m looking forward to. There are a lot more weapons you can work with and you have to deal with, so I like that aspect of it.” 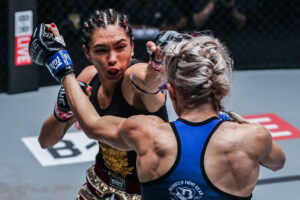 Todd has a lot in common with her upcoming opponent. Both were beaten by Stamp Fairtex in Muay Thai title fights and Juniku was perhaps unfortunate not to get the nod from the judges.

Todd was impressed by the Australian in that fight,

“(She) had a really exciting fight with Stamp. I know she is the type of opponent that’s going to really push me to be better, so I was actually really excited to hear about it,” Todd says.

While the two have plenty in common there is a 15 year age gap. Todd will play the part of the seasoned veteran while Juniko is the up and coming contender.

But the 35 year old is adamant that age won’t be a factor,

“Age doesn’t really come into play because I trained my butt off, and I feel like I train smart. I have knowledgeable coaches that take into account my heart rate and my recovery to be able to maximize my energy levels so that I can dictate the intensity when I want to.” Picking up the pace

Having fought for the full 15 minutes in her most recent outing at ONE: ‘King of the Jungle’ the American plans to pick up the pace in this three rounder,

“Obviously, the pace is different between three rounds and five rounds. With a five-round fight, you have to learn to manage your energy. I don’t want to say relax, but you need to know when to pull back and know when to hit the gas.”

Knowing she won’t have to fight for more than nine minutes will allow Todd to start faster,

“In a three-round fight, I feel like the intensity is pretty high all-around. You only have three rounds to show what you’ve got and prove to the judges that you have that fight.”

She has nothing but respect for her Australian opponent. But Todd is adamant that it will be the seasoned campaigner and not the young prospect who emerges victorious from this bout,

“I know Alma is a very tough girl. She’s fought some tough, tough women, so it’s going to be a really exciting back-and-forth match. But I plan to come out on top in the exchanges and get my hand raised at the end.”