Kimihiro Eto submits Amir Khan at ONE: ‘King Of The Jungle’

After a controversial decision win over Ev Ting in his last appearance, Amir Khan wanted to impress at the Singapore Indoor Stadium but it was Kimihiro Eto who came in and spoiled the party. There were no fans in attendance at ONE: ‘King of the Jungle’ due to the coronavirus.

The two lightweights met in the middle of the cage and Eto immediately decided to clinch against the fence and drag Khan to the ground. He slid into mount without much resistance and patiently waited for his foe to make a mistake.

While the Evolve MMA product tried to scramble out, Eto took his back and snatched up the neck. Khan attempted to wiggle out but the arm was too deep under the chin and forced the tap.

Eto (17-5-2) takes out a major contender in his second promotional appearance with his eighth finish of his career and throws his name onto the list of fighters to watch in the lightweight division. Meanwhile, Khan (12-7) looks to be in decline with a 1-4 record in his last five fights. 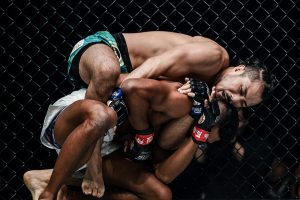 Coming off an unanimous decision loss in his promotional debut against Agilan Thani, Yoshihiro Akiyama needed a win badly and he delivered with a first round knockout of Sherif Mohamed.

The Egyptian attacked with powerful looping overhands and caught Akiyama. While the Japanese star was wobbled, Mohamed tried to put on the finishing touches but ‘Sexyama’ weathered the storm.

Without much variation in his assault, Mohamed began to eat kicks to the leg and became desperate due to his waning conditioning. As he chased after Akiyama, he was caught clean by a counter right hook and dropped.

With his opponent face first on the canvas, ‘Sexyama’ came in and added one punch for good measure before the referee stopped the contest.

Akiyama moves his record to 15-7 and snaps a two fight skid that dates back to 2015. Mohamed, however, loses his third in a row and sits at 9-6. 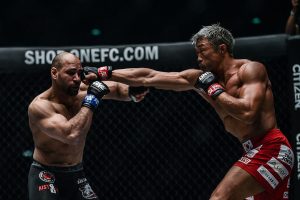 In a key fight in the women’s strawweight division, Tiffany Teo (9-1) weathered the early storm and powered through a submission attempt to come back in the closing moments of the third round to take out Ayaka Miura (10-3) with shots to the body.

Miura had the better of the opening round but could not find one of her trademark submissions despite being in a dominant position. Once Teo was able to keep the fight standing it was a different story with the Japanese strawweight looking low on energy and ideas.

The stoppage was a surprise as Teo was only landing light shots to her opponent’s body. But by that stage the Singaporean was only seconds away from a decision win. Next up for her looks set to be a rematch with strawweight champion Xiong Jing Nan. 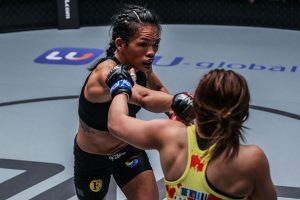 One fighter who definitely will be challenging for a title next is Denice Zamboanga (7-0). She used her striking to good effect against two time atomweight challenger Mei Yamaguchi (21-11-1).

By the end of the contest the Japanese veteran looked bruised and battered and the decision was never in doubt. Next up for Zamboanga will be a shot at reigning atomweight champion Angela Lee.