Jarred Brooks appears to have himself a third fight booked in ONE Championship. The American has enjoyed an emphatic start to his career inside the circle and quickly dispatched two ranked opponents in Lito Adiwang and Hiroba Minowa.

From the get-go ‘The Monkey God’ has enjoyed plenty of back and forth with Joshua Pacio and doesn’t think the strawweight champion is keen to fight him,

“Josh is a beast, man. He’s definitely somebody that I look forward to fighting in the future and I know that he doesn’t seem keen to what I’m doing in his strawweight division right now,” Brooks said. 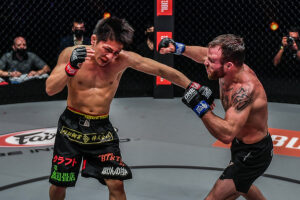 The American has his sights firmly set on a fight with the champion and is willing to wait as long as it takes,

Next up for Brooks will be a bout against undefeated South African Bokang Masunyane. Brooks confirmed that a fight between the top two contenders at strawweight was already in the works,

“Masunyane looks possible to happen very soon. That’s the name on my plate and that’s what I’m going to eat!”said Brooks. 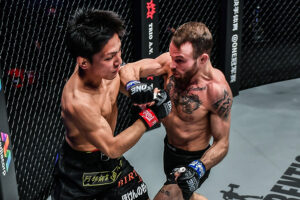 Continuing with the culinary theme Brooks confirmed that,

Brooks was watching the strawweights and the flyweights at ONE: ‘X’ last weekend. The 27-year-old was complimentary of both Senzo Ikeda and Jeremy Miado but the fight he really wants is Adriano Moraes,

“I would love to face Adriano Moraes at the end of the day. Me and him have some bad blood. I congratulated him (but) I know he hates my guts! Those Brazilians, when they hate you, they really mean it.”

The two trained together at American Top Team and have been involved in a war of words with Brooks adamant he got the better of the Brazilian. It’s not personal but he is very confident he could beat the flyweight champion,

“I’m a business guy, so I’ll be like ‘Adriano, let’s get it. I’m going to beat you like I did when I was in the gym.’ That’s me speaking my truth, but at the same time, I don’t hate anybody you know?”