Ji Yeon Kim is stuck in South Korea and doesn’t know when she will be able to conduct a training camp again, let alone fight. The last few months have not been kind to the 30 year old who has seen two fights fall through.

Just a few weeks after earning a knockout victory over Nadia Kassem at UFC 243 in October, she signed on the dotted line to face Colombia’s Sabina Mazo at UFC Busan.

The day that the contract to fight, arrived disaster struck,

“It was the last round of sparring that day at practice,” says Kim.

“I slipped and reached out to brace myself on the wall, that is when my elbow bent the wrong way.”

“As it hyperextended, ligaments and tendons completely ruptured.” 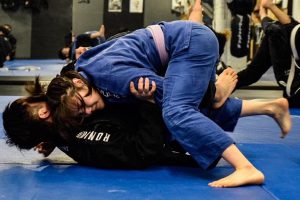 Even with a mangled arm, she was dead set on making that walk to the cage on December 21st. Kim painstakingly searched for other methods of accelerated recovery without surgery but eventually chose to go under the knife.

She figured that in the long run having the operation would be the better choice,

“Since it was a chance to fight in my country, there was a lot of anticipation and significance attached to the event. I tried to find a way to go on with my preparations but when the doctor gave his diagnosis, I lost hope.”

“As a professional athlete, I have never had a major injury. Getting hurt during a training camp and having surgery, I had many negative thoughts running through my mind.” On October 24th the surgeon successfully reattached her ligaments to put her on course for a full recovery. Kim following the protocol the doctor had laid out, was disciplined with her diet and has changed her entire outlook on the injury,

“There must be a reason why I was injured. It must be God’s will and there is another path I should take.”

Normally when a fighter is on the shelf good news is hard to come by. But in early December ‘Fire Fist’ made history.

She became the first South Korean woman to enter the official UFC rankings at #15 in the flyweight division. However she is not getting too carried away about this particular accolade,

“This proves I have been fighting hard. It is rewarding since I am getting some recognition for my skills and dedication,” Kim said.

“At the same time, I do not put too much stock in it. I don’t want to dwell on it, I want to be remembered for being a tough and fearless Korean fighter.”

In early 2020 Kim began movement training and started the rehabilitation process. As she strengthened her elbow, jiu-jitsu and boxing were slowly adding to the schedule over the next few months.

After receiving the green light from her doctor, the South Korean was contracted to fight on June 27th at UFC Austin against Alexa Grasso. But South Korea was hit with a wave of coronavirus infections in February and a nationwide lockdown was put in place to combat the rapid spread that came quickly.

This meant that training facilities were closed and social distancing was introduced,

“Fighters and coaches could not train together so I worked out alone most of the time. Fortunately, I was focusing on my rehabilitation at the time, so recovery was pivotal,” she recalls.

It meant Kim was unable to put together a proper training camp,

“I was unable to carry out proper training due to government regulations limiting the number of people gathering in one place. Much of my training was carried out online or alone.”

But the 30 year old had a plan. She has been training on and off for a year or so at Alliance MMA in San Diego, home to many of the top fighters in the world such as Dominick Cruz, Jeremy Stephens, Phil Davis, and Jessica Penne.

Sen Diego was her destination until the global pandemic put a halt to everyone’s travel plans,

“I spoke with Eric Del Fierro and Angela Hill about doing my camp there but all of a sudden, the coronavirus became serious and the visa issuance period was delayed. In the end, I was unable to travel.”

Conducting a training camp at home was never part of the plan. Kim has been trying to train but says it is still very difficult,

“It is very stressful. Preparing to the best of my abilities has been difficult and the current situation is very confusing.”

However the plan remains the same. She wants to fly to the U.S. at the earliest available opportunity and go up against Grasso on a UFC card.

Whether the matchup ever materializes remains to be seen. But for Kim it is very much on her mind and if the fight does happen she thinks there will be fireworks,

“It will be a barnburner, something that fans will remember.”