John Wayne Parr was asked what his advice would be to young fighters moments before his final fight at ONE: ‘X’. An appropriate answer might have been ‘not now mate I’m a bit busy’ but the Australian took time out from his warmup to share a few words of wisdom.

You can hear what JWP had to say here:

Parr has been competing regularly in Muay Thai and kickboxing since he was a teenager. Most fighters round up their wins to the nearest ten but the Australian is adamant that he was stuck on 99 when he retired, we have to admire his honesty!

It all adds up to an incredible amount of experience and when the 45 year old speaks you should probably listen. His comments could be summarized as follows,

“Any young fighters out there make sure you train as much as you can, be committed and try and fight as often as you can. If you get beat you learn from your mistakes, you get stronger and you don’t let those mistakes happen again. Just enjoy the process and have fun.” 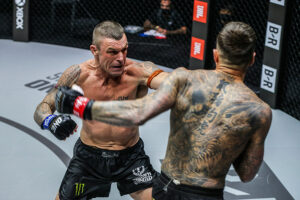 Whether or not JWP managed to learn from the mistakes he made during his career only he will know. But there is no doubt that the veteran had a lot of fun during the process.

Never one to take himself too seriously there is always a smile on JWP’s face and he clearly loves the fight game. We won’t be seeing him inside a ring, or a cage, again as an active fighter but we are sure he will continue coaching and sharing his love of Muay Thai with the next generation.

His daughter, Jazzy Parr, is a boxing and Muay Thai champion who has also competed in BJJ. His son, Jesse Parr, is seems more focused on the submission grappling side of things and has won numerous gold medals.

So whatever the future holds for JWP we doubt this will be the last time he finds himself giving advice backstage at a ONE Championship event!