Monster War 1 took place on Saturday night in Paju. The event was headlined by a heavyweight tilt between Jun Soo Lim and Ik Tae Jin that ended in a seldom seen submission.

The fight started as expected with both these giants throwing heavy leather. The punches might have missed their target but the sound of leg kicks landing echoed around the Unjeong Team Ace Stadium.

After establishing his range, Lim connected with a couple of quick jabs that had his opponent’s attention. The former AFC openweight champion then came over the top with a solid right hand and then went back to the jab once more. 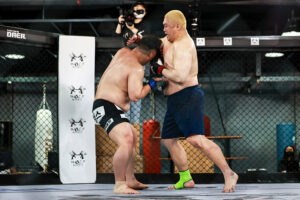 Overall, both fighters were limited with their combinations and the accuracy of their strikes were minimal. But the action was about to intensify in the second round.

Lim countered with a looping overhand right that staggered Jin just 15 seconds or so into the round. He swarmed on his opponent and landed a few more punches.

Once locked in the clinch, Lim dragged the fight to the ground and commenced to punish Jin with short punches while he was stuck along the fence. While Jin was trying to scramble out, ‘The Korean Bear’ locked up the bulldog choke and the tap came shortly thereafter.

The 38-year-old Lim (13-12) picks up his first submission victory since his professional debut in 2005 and snaps a three-fight skid. Meanwhile, Jin (2-3) is submitted for the first time in his career and loses his second straight contest. 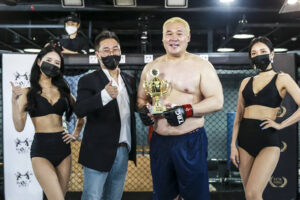 When the bell rang to end the co-main event Dong Gyu Kim and Han Gil Choi were battered and bruised to almost unrecognizable levels. The two bantamweight had gone toe to toe for three action packed rounds.

The first round kicked off with Choi attacking the front leg with some solid shin on shin action. Not afraid to take shots to the leg, Kim marched forward and snuck in punches between the guard which had some cumulative impact.

By the midway point of the first round, the left side of Choi’s face was showing damage. The Korean Zombie MMA product switched the game plan and jabbed from distance while peppering in calf kicks.

Although it looked like Kim was somewhat flustered, he picked up the pace and darted in with cracking punches to the body. A right hand dropped Choi yet he was able to scramble back up and get his bearings. 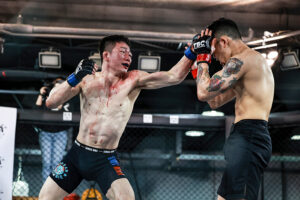 The middle frame is where the fight turned into a complete brawl. Both bantamweights were satisfied with standing and trading on the feet.

Choi blasted another kick to the lower leg and Kim was visibly hindered. After another kick landed again the tides shifted.

‘Big Mouse’ was struggling with his movement and that opened up many angles. Choi  was able to capitalize and continuously connected with the right hand while landing jabs sporadically. 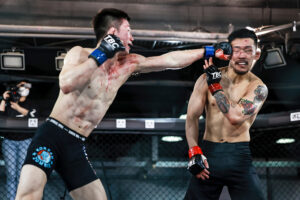 With Chan Sung Jung screaming instructions in his corner, Choi picked up the pace and put the pressure on his foe. Kim’s leg was clearly compromised there was nothing behind his punches and the speed was gone.

Surprisingly, Kim bit down on his mouthpiece and marched forward in the final round content on eating punches to land a few of his own. This approach worked but the volume of shots coming from Choi was too much.

Kim’s gas tank was on empty and by this stage he was basically blocking punches with his face. Choi took the decision win on all three scorecards and improves to 4-2 while Kim drops to 8-4. 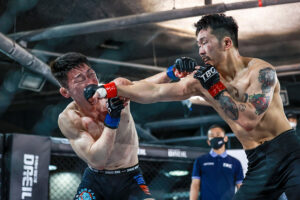 In some earlier heavyweight action, Jae Woong Youn collapsed Korean Top Team’s Sung Jun Lee with a leaping left hook and finished it off with a myriad of unanswered shots on the ground. Kim (2-3) returns after a nearly seven-year hiatus and snapped a three-fight losing streak while Lee (1-4) continues a downward spiral with his fourth straight loss.