The Beast Championship 2 is set for the Sindorim Technomart in Seoul on September 10th. The event will feature a heavyweight fight pitting Myung Hwan Kim against Ik Tae Jin.

Kim (3-1) is coming off a decision win over Seung Jun Lee at TBC 1. He enjoyed success as an amateur winning five fights out of six with TFC and Road FC.

The 24 year old has appeared on the fight cards of various Korean promotions. He beat Jung Kyun Kim by decision at Angel’s Heroes 2 but was stopped by Ji Won Kang at Angel’s Fighting 8.

Jin (2-3) also had success as an amateur with Road FC. He made his pro debut at IGF 3 and was stopped by Shinichi Suzukawa in just 18 seconds. It would be three years before he returned to competitive action, stopping Han Yong Lee at Road FC 48.

However Jin’s form has slumped and the 28 year old is coming off back to back losses. He dropped a split decision to Il Hak Oh at Road FC 55 and was choked out by the experienced Jun Soo Lim at Monster War 1. 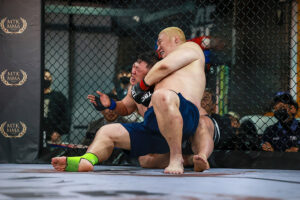