Jun Yong Park wants to be an elite fighter

Jun Yong Park is coming off the biggest win of his career. When the UFC returned to South Korea for the second time last December, the 29-year-old Gangwondo native had the odds stacked against him.

Entering the bout against Canadian Marc-Andre Barriault at UFC Busan he was fighting in his home country for the first time in over two years. Park was coming off a lackluster promotional debut at UFC Shenzhen four months earlier, where he was finished in the second round by Anthony Hernandez.

Pushing all the pressure aside and feeding off the excitement of the home crowd, Park put the pressure on Barriault land earned a decision win. The Korean says he struggled to control his emotions after the fight,

“I was so happy that I won the fight that I was overwhelmed, my voice became this high tone. Even with that, I was filled with happiness.” 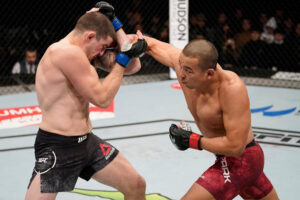 Just before the Covid-19 pandemic hit in late February, Park headed over to Thailand with teammate and fellow UFC fighter Da Un Jung. They spent time in Pattaya training with Volkan Oezdemir and Alistair Overeem for a few weeks.

Park says that the UFC veterans were able to pick up a few tips from him,

“It was like training with a couple of friends. I had a lot of fun with them. These established fighters wanted to learn the techniques I was utilizing. It was eye-opening and I gained a lot of confidence from all those sessions.”

After experiencing one of the best cross-training experiences of his career, Park returned back home in the midst of the pandemic. Gyms were operating on a limited capacity and life was altered by many of the restrictions.

This did not, however, deter Korean Top Team from continuing to train. Park says the fighters there had a busy schedule,

“Team classes are scheduled according to the training program by our head coach. In the evening, we do light cardio like running and that is how it works. Basically, we work out two times a day.”

However he has seen previously booked UFC fights fall through and is happy to finally be back in the octagon again,

“I didn’t feel any inconvenience during the height of Covid. The only difficulty was that my fight was delayed. I am so hungry to step back into the cage.”

Park is alluding to his canceled bout against Trevin Giles at UFC Vegas 5 in early August, where he had gone through a whole training camp only to be pulled a week out due to travel issues.

This time around there are no issues with travel and Park and his team have already landed in Abu Dhabi ahead of Sunday’s fight. He faces Welsh slugger John Phillips in a middleweight clash at UFC Fight Island 6.

The event is headlined by a featherweight fight between The Korean Zombie and Brian Ortega. There will be no live audience in attendance but Park is just happy to be back doing what he loves,