The Fukuoka International Center played host to the 2020 K-1 World Grand Prix tonight albeit with a limited crowd due to the coronavirus pandemic.

There was a setback to the show earlier on when the original main event had to be scrapped after Japanese superstar Takeru injured his hand training for his K-1 super featherweight defence against Leona Pettas.

The new main event featured a clash for the K-1 cruiserweight title pitting between defending champion Sina Karimian against K-Jee. This was the second fight between them, with the Iranian taking a decision win over in the semi finals of the K-1 World Grand Prix in 2018. 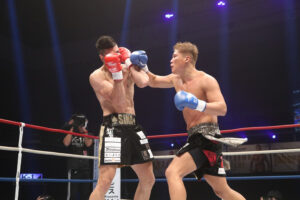 The action didn’t take too long to get going in the first round with both feeling each other out in the opening minute before K-Jee started opening up on Sina with heavy punches. A barrage of hard overhand rights saw the Iranian drop to the canvas and take an eight count.

K-Jee went straight back into the attack and opened up with more heavy shots and Sina’s corner threw the towel into the ring to save him, with just over a minute to go in the opening round. Kana pushed forward trying to take the fight in close in round two, but again Kotomi showed good footwork and positioning to counter and pick her off with sharp jabs and straight lefts.

Kana landed with a solid hook in the third, but Kotomi took it well and used some sharp push kicks and punches to keep Kana at distance again. The fight was close, but at the finish all three judges scored it for Kotomi. In the only other international match on the card Masaaki Noiri took a lopsided decision win over Brazilian Vitor Tofanelli. The opening round was fairly uneventful, but the Japanese fighter started to really open up in round two, attacking with hard punches and knees.

A hard straight right saw Tofanelli take an eight count, before another barrage of punches and knees dropped him for a second count near the end of the round. In the final round Noiri came out looking for a knockout, but the Brazilian was able to close him down fast and tie him up.

Tofanelli picked up a warning for excessive clinching but with Noiri unable to find the space to let his punches go he was able to see out the round. The decision was a foregone conclusion with all judges seeing the fight in favour of the Japanese fighter.