Amir Aliakbari was expected to be a serious contender for the heavyweight title in ONE Championship but Korea’s Kang Ji Won appears to have well and truly spoiled his coming out party.

Aliakbari arrived with a 10-1 record with his only loss coming against Mirko Crocop at Rizin World Grand Prix 2016. But his winning streak would come to a abrupt end at ONE: ‘Fists of Fury’ Part II.

He had been very vocal about wanting to take the belt from current champion, Brandon Vera and had made plenty of noise about being the best heavyweight on the planet upon signing for the Singapore-based promotion. The 32-year-old was favoured to overcome Kang in his ONE debut, and in the opening exchanges, he looked all set to do just that. The Iranian cracked Kang with two big right hands to open a gash around the Korean’s left eye. Having landed another, this time a right hook, Aliakbari stepped in to throw another but Kang slipped beautifully, countering with a monster left hook.

The blow left Aliakbari flat on his back as Kang wheeled off in celebration, extending his record to 5-0. The Iranian’s record now stands at 10-2. Anatoly Malykhin (9-0) had just made a statement on his own ONE Championship debut in the co-main event. He dispatched Alexandre Machado (9-4)  in the first round, extending his undefeated record and continuing his remarkable 100% finishing rate.

As Machado shot for an early takedown, Malykhin was able to sprawl before taking the Brazilian’s back with ease. The Russian then softened his opponent up with some knees before dragging the BJJ blackbelt to the canvas.

Working from side control into the crucifix position, Malykhin began to drop bombs on the defenseless Machado. As his opponent struggled to break free, Malykhin held the position, landing countless shots causing the Brazilian to tap. China’s Tang Kai will surely be knocking on the door of the featherweight top 5 rankings after another hugely impressive display against Ryogo Takahashi.

Tang came into the fight riding a six-fight winning streak and needed just two minutes to dispatch his opponent with a straight right followed by five more surgical punches to seal the victory. He marches on to 12-2 with Japan’s Takahashi slipping to 14-5. 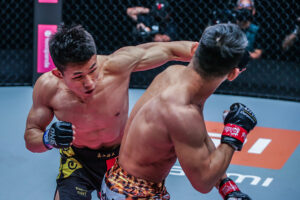 It took Yoshiki Nakahara (14-5 )about a minute and a half to put away the previously undefeated, Ruslan Emilbek (8-1). The Japanese fighter landed a sweet right-hand counter before following up with hammer fists.

Mark Abelardo (20-8) got proceedings off to a roaring start with a savage second round knockout against Emilio Urrutia (11-8). In the second stanza he landed an uppercut elbow which dropped the American like a stone. 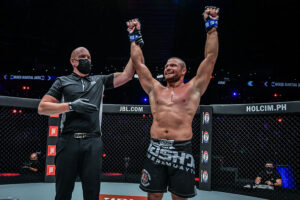