Following a razor-thin split decision win over Brandon Davis at UFC 241 last month Kang Kyung-Ho has pledged to continue his professional career as a bantamweight.

Kang, who has been plying his trade in the 135lbs division for the past eight years, is one of the six athletes that have been advised by the California State Athletic Commission (CSAC) to move up in weight.

In the state of California, fighters cannot gain more than 10% of their body weight between weigh-in day and fight night. This is done to reduce drastic weight cuts, which continues to be a pressing issue in the sport.

The 32-year-old Busan native checked in at 136lbs during the official weigh-in, but he ballooned to as much as 156lbs the following day.

Despite the recommendation of CSAC to transfer into a much higher weight class, Kang believes that bantamweight remains to be the right bracket for his 5’9″ frame,

“I am staying at bantamweight for good. I’ve been part of the division since 2011. I was the champion of Road FC in the same division. It’s still the best division for me. As long as I can meet the requirements safely and stay healthy I will remain as a bantamweight,” he said.

If ever he has to fight again in California, Kang is more than willing to work with the governing body to monitor his weight-cutting process,

“It’s normal. It happened to other athletes as well. But I can assure that we made weight for my fight against Brandon Davis without doing any harm to my health. It’s very safe,” he stated.

For Kang, there is more work that needs to be done at 135lbs before entertaining the idea of moving to featherweight.

“I feel much more comfortable being inside the octagon and fighting here. I’m enjoying it even if it hurts sometimes,” Kang said in jest when he described his six-year tenure in the UFC. Kang is just a month removed from his grueling encounter with Davis, but he is already looking ahead to his next challenge.

“I will fight anyone who stands in front of me (whether) it’s a big name or a small name in this division. But of course, the bigger name in the division the better,” he said

“I am ready as always. What’s important is that I stay active and improve my rankings,” Kang added.

When asked for a specific opponent that he has in mind, Kang quickly mentioned the name of UFC hall-of-famer Urijah Faber,

“I want him as my next opponent. I look up to him as a fighter and an MMA legend. Now that he is back, it’s a great chance for me to test my skills against a notable name in the sport.” 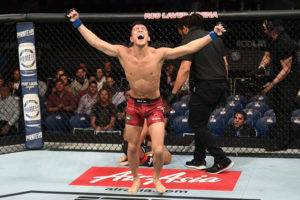 Faber came out of his nearly three-year retirement this past July, beating Ricky Simon by  stoppage just 46 seconds into their fight at UFC Sacramento.

Kang’s dream date would be a bantamweight bout with Faber at UFC Busan,

“I definitely 100%, want to be on the South Korea card at the end of the year. I want a ranked bantamweight on that card like Urijah Faber. It’s in my hometown, so it would be amazing. Let’s do it.”