Kanna Asakura is set to fight for an international promotion for the first time at Bellator Japan and the 22 year old wants to make the most of this opportunity.

She is scheduled to meet Jayme Hinshaw at the Saitama Super Arena on Sunday. Fans and industry insiders have always expected a lot from the Japanese star and Asakura now has an opportunity to showcase her skills to the world,

“I can’t wait. I just hope I can put on a really good performance for everybody on the night,” she said through her interpreter.

“I don’t know if there’s anything that can prepare you for a show of this magnitude. It is so much bigger than anything I have fought on before. But once I’m in the ring or cage, I won’t be thinking about anything else, just my performance,” Asakura added. That’s quite a statement from someone who has fought on some of Rizin’s biggest cards. She won the promotion’s Super Atomweight Grand Prix in this venue on December 31st, 2017.

She came up short against Ayaka Hamasaki in a title fight at Rizin 14, on the same card that Floyd Mayweather beat Tenshin Nasukawa in a well publicized boxing match.

Asakura, who is coming off a win over Alesha Zappitella at Rizin 18, says fighting in front of an international audience brings additional pressure,

“I can feel the pressure. It is my international debut. Fans in the United States and other parts of the world will be able to watch my fight. I really need to win this fight. It is a big deal. I’m preparing for everything and making sure not to be careless,” she said. 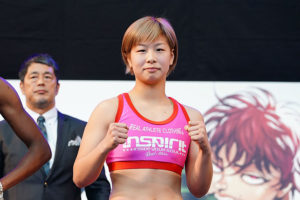 Bright lights aside, she desperately wants to impress the global fanbase and the Bellator matchmakers,

“I worked very hard to be in this position. I want to thank Bellator and Rizin for this kind of exposure. I won’t disappoint them because I promise to give my best performance in my fight this weekend,” she said.

While Asakura savors the opportunity of a lifetime, she knows that her task is far from straightforward. The woman standing in front of her is Hinshaw, the reigning King Of The Cage women’s atomweight champion.

With a 4-3 standing in the sport, Hinshaw has won her last three outings, including a second-round submission win over current ONE Championship competitor Bi Nguyen in a title defense last year. But Asakura, who also has a big advantage in terms of experience, believes that she will be stronger than her opponent,

“My advantage will be the physical aspect. She likes to clinch and grapple too, and I like that. It works for me. I think I can win it from there,” she said.

Asakura hopes a win this weekend will lead to bigger and better things. Bellator doesn’t currently have an atomweight or strawweight champion and the Japanese fighter has high hopes for her international career,

“It’s my debut in Bellator, so I think it’s important to create a good impression with a convincing victory. I want to win in dominant fashion and showcase a winning performance that anyone can enjoy watching.”