Keanu Subba plans to stop Ryogo Takahashi with a head kick at ONE: ‘For Honor’

‘Where are you from?’ It’s a simple question for most people, but one Keanu Subba might struggle to answer. He was born in Hawaii, grew up in Malaysia, went to high school in the U.S. and his mother is from China while his father’s from Nepal.

These days he is based in Kuala Lumpur where has has been preparing for Friday’s fight with Ryogo Takahashi at ONE: ‘For Honor’. Beating the former Shooto champion will be a big ask but Subba is not short of confidence,

Subba is only 24 but is already a veteran of nine ONE Championship fights. He has won seven of them, a record which compares favourably with just about any fighter in the promotion’s featherweight division. His nomadic upbringing actually helped set him on the path towards becoming a mixed martial artist. The family was living in Ohio but when his mother was forced to return to Malaysia after her visa expired Keanu and his brother gained independence at a very early age,

“I was 14, and my brother was turning 16. We moved into a one-bedroom apartment 30 minutes away from our school, and we survived. My dad sent money every month, and Gianni had a side job to keep us going,” Keanu explains.

Gianni is not doing too badly these days either, he’s one of ONE Championship’s top flyweights (although currently sidelined due to a medical issue). But it was during this period that the two siblings first discovered martial arts,

“The only gyms were too far away for us to get to so we would just go at it in the back yard. We had bleeding gums and everything because we had no mouthpieces (but) we thought, ‘wow, this is fun’ and just continued to train and learn on our own,” Keanu explains. 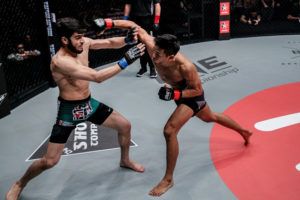 These days his training is a little more sophisticated. He’s spent a lot of time at Bali MMA but for this fight Subba has been preparing at Monarchy MMA in his hometown of Kuala Lumpur,

“I’m in the best shape of my life for sure (both) mentally and physically. Training at Monarchy has been great. We’ve started training with heart-rate monitors, we have nutritionists now, and strength and conditioning coaches. Everything has been perfect. I cannot wait to go out there and show what I’ve been working on,” he said.

Virtually all of Subba’s wins have come by way of either submission or ground and pound. However he thinks this is one fight where his striking skills could come to the fore,

“The key to beating him is being unorthodox and unpredictable. I have the range and reach advantage so I’m going to need to use that well in this fight.”

In fact Subba is even prepared to go as far as to offer a very specific prediction,

“I really see me finishing him with a high kick in the first or second round.”