Kenan Song‘s clash with Max Griffin at UFC Vegas 22 was elevated to co-main event status after bout between Gregor Gillespie and Brad Riddell was pulled from the card just hours before due to covid-19 protocols.

But It would turn out to be a day to forget for the Chinese fighter, who saw his two-fight winning streak snapped in brutal fashion as Griffin produced a stunning knockout barely three minutes into the first round.

It has been more than four years since ‘the Assassin’ was last on the receiving end of a knockout. The stoppage on that occasion, coincidentally, coming at the hands of Riddell back in China.

As soon as the bell rang, Griffin began throwing with bad intentions, establishing the jab before unleashing a right cross to the body.

Song replied with two high kicks that failed to find the mark before landing with a neat jab of his own.

A stiff jab from Griffin preceded another powerful cross to the body as he sought to change levels and force his opponent up against the cage.

The man from Hebei was able to work his way free as the fighters found their way back to the centre of the octagon.

Griffin unleashed a stinging straight right hand that left Song moving backwards. He responded with a pair of leg kicks and a head kick, but Griffin was alert to it.

It was then Song’s turn to eat a leg kick as Griffin continued to move forward. Song responded with a firm teep to the body but was soon met with a low kick followed by a right hand that left him wobbled. Sensing the finish, Max ‘Pain’ unleashed a monster left-right combination to leave his Song flat on the canvas.

It was a big statement from the veteran and he extends his record to 17-8. Meanwhile, Song drops to 16-6.

MAX PAIN ????@MaxPainGriffin gets one of the cleanest knockouts you'll ever see! #UFCVegas22 pic.twitter.com/vekhClTc3J

Further down the card, Australia’s Tai Tuivasa added to his highlight reel with a savage first round finish against Harry Hunsucker.

Both fighters began the fight exchanging heavy low kicks before Hunsucker unloaded with a slick one-two combination. It proved to be a false dawn for the American as Tuivasa clearly hurt him with a powerful leg kick before going to work upstairs.

The Sydneysider uncorked a mammoth right hand to put Hunsucker flat on his back. ‘Bam Bam,’ who’s spent time training in Thailand in the past, then delivered four more finishing shots to seal the twelfth win of his career; eleven of those victories ending with a knockout. His record now stands at 12-3 while Hunsucker slips to 7-4. 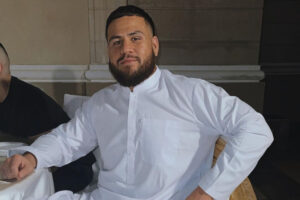