Khabib Nurmagomedov underlined his credentials as the best mixed martial artist of all time by submitting Justin Gaethje in the second round and announcing his retirement at UFC 254. It has been an emotional few months for the UFC lightweight champion whose father passed away recently.

The opening round started slowly with Gaethje struggling to find the right range to land his trademark low kicks. Nurmagomedov seized the centre of the octagon and seemed content to trade punches with the striking specialist.

The Russian was moving forwards and applying constant pressure and Gaethje looked to circle out and land strikes. Midway through the round the Russian tried for his first takedown but it was successfully stuffed by the interim champion.

Gaethje finally started to find a home for his leg kicks but he was constantly backtracking with Nurmagomedov using push kicks to keep him at bay. A flying knee to the body of the American landed flush and he countered moments later with a head kick which was easily blocked.

A right hand to the body followed by a left hook upstairs connected clean for Gathje in his best moment of the fight. He followed up with a couple of left kicks but NurmagomedovÂ kept coming forward relentlessly and finally landed his first takedown. 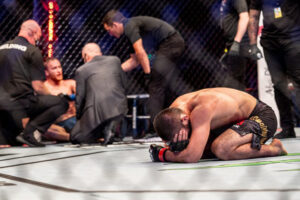 Gaethje was quickly mounted by the Russian and the round finished with NurmagomedovÂ seemingly on the cusp of finishing the fight with an armbar. The regular champion was on the front foot right from the start of the second stanza and tried for a takedown after 45 seconds.

Two hard right kicks to the left leg seemed to hurtÂ Nurmagomedov who wasted no time in getting Gaethje to the ground and taking his back. He quickly moved into mount and secured a triangle from top position with the American tapping almost instantly.

The referee was slow to see the tap and Gaethje was unconscious by the time he stepped in. The finish came at the mark 1:34 mark and seesÂ Nurmagomedov establish himself as the undisputed lightweight champion.

Gaethje drops to 22-3 while Nurmagomedov moves up to 29-0. He does not plan to defend the title again, announcing his retirement in an emotional speech after the submission win.

Elsewhere, Jung Da-Unâ€™s light heavyweight clash with Sam Alvey ended in a split draw. It was an entertaining affair, and the Korean produced a strong third round showing. He left Alvey stunned with some big elbows in the third round and despite being unable to secure the win.