A water park in Phuket had an unexpected visitor last weekend. Khamzat Chimaev popped down with some friends to enjoy the slides and rides at Blue Tree.

They were so pleased to see him they told everyone on Facebook:

Blue Tree Phuket welcomed ‘undefeated UFC champion Khamzat Chimaev’. While he hasn’t quite earned that title yet they aren’t the only ones getting carried away by the Russian fighter’s potential.

Chimaev has a 10-0 record that includes four UFC wins, all of which have come inside the distance. He is currently ranked #11 but is rapidly emerging as the most exciting prospect on the roster.

Chimaev doesn’t have a fight booked but it is good to see the 27 year old relaxing and enjoying himself ahead of what looks set to be a pivotal year.  He is currently training at Tiger Muay Thai as he prepares to launch his assault on the top ten of the welterweight division. 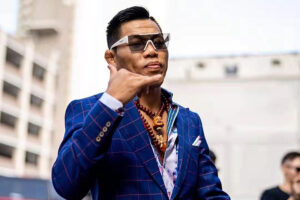 Jingliang Li is all dressed up with nowhere to go!