Last October Kiamrian Abbasov became the ONE Championship welterweight champion. It was the highlight of his career and he could not have envisaged having to wait over a year to mount his first defence.

But the 27 year old will finally be putting his title on the line at ONE: ‘Inside the Matrix’ Part II this Friday and says the layoff has made him even hungrier,

“My last bout happened a year ago, so I am very hungry now. It doesn’t feel like preparation for a title defense. It feels like I am training for a title shot again.” 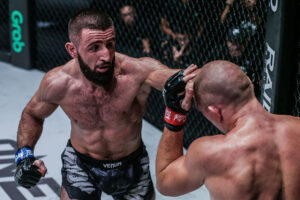 While Abbasov is the champion he probably won’t be the favourite. Opponent James Nakashima holds a perfect professional record and the Kyrgyz welterweight admits he feels more like a challenger,

“I have so much hunger right now. I feel like I am fighting for another belt, like I’m shooting for more gold.”

However Abbasov will never forget the moment his hand was raised at the end of a five round fight with former champion Zebaztiam Kadestam at ONE: ‘Dawn of Valor’,

“It was incredible. When I had my hand raised in the air, I couldn’t believe that I’d become a ONE champion. For the first two or three days, I could not believe (it) and only after getting back home did the feeling sink in.”

Defending the belt will arguably be even harder than winning it was. Nakashima has an unblemished record and Abbasov says he and his team have been diligently studying fight footage to prepare,

“We have been analyzing his techniques and tactics, mainly based on his last bout against Yushin Okami. Mainly, it’s a job for my coaches as I don’t like watching my opponents. It’s usually enough to see one fight and that’s enough for me to understand what’s what.”

Both men have backgrounds in wrestling. Nakashima has the undefeated record but Abbasov has the belt and the champion says he is not intimidated by his opponent’s credentials,

“I don’t care about his record, I am not scared He is a tenacious wrestler so let’s see whose wrestling is better.” Abbasov acknowledges that Nakashima has been in with some good level competition both with LFA and ONE Championship. But he feels his skill set will pose the challenger a different set of problems,

“He fought top opponents (but) he hasn’t fought guys like me and it will be a big problem for him.”

He also maintains that his mindset has not changed since becoming a champion. Abbasov is always the aggressor and he says Friday’s fight won’t be any different,

“People say it is harder to defend a title than to get one because you have more motivation but I don’t think so. I have always been and remain a hunter, and opponents are my prey.”

Petchmorakot returns at ONE: ‘Full Circle’