Kiamrian Abbasov will be moving up to middleweight to challenge Reinier de Ridder for his title next week. He is the reigning welterweight champion and will be looking to add another belt to his collection.

Having beaten Aung La Nsang not once but twice de Ridder is a bona fide star. The Dutchman currently holds two titles, an achievement Abbasov is hoping to emulate.

While he has plenty of respect for his opponent Abbasov is laughing at the idea of de Ridder finishing him at ONE: ‘Full Circle’,

“Reinier de Ridder without a doubt is a good fighter. His record speaks for itself. He is undefeated, 14-0. But he has been talking a lot about himself recently, that he is the best grappler in the world, or that he can knock me out easily. What a funny guy. We’ll see if he can deliver, but his dreams are big.” 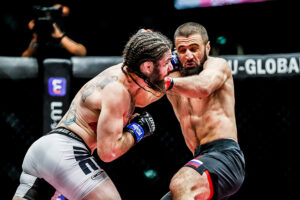 If Abbasov wins then he will earn the right to call himself a two division ONE Championship title holder. But the current welterweight king is more excited about the prospect of becoming the first fighter to ever beat de Ridder,

“His unblemished record is a big motivation for me. I’d like to be the first guy to upset him and spoil this perfect record.”

He feels that the Dutchman may be underestimating him and Abbasov sees this as a factor in his favour,

“Many people could have beaten me, but whose hand was raised at the end of each fight? Mine! And those guys either got knocked out or lost on points. If de Ridder thinks our fight will be like a pleasant walk in the park, let him think that. It plays to my advantage.” 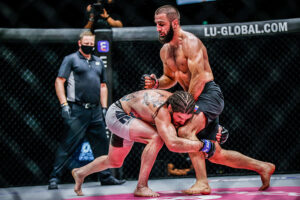 De Ridder made his name by beating La Nsang not once but twice. The Burmese star is also in action at ONE: ‘Full Circle’ which is set for the Singapore Indoor Stadium next Friday.

While de Ridder has the belts it is La Nsang who is the biggest name and Abbasov wants to earn a shot at the Dutchman,

“I believe if we met, it could be a tremendous five-round fight, a spectacular, technical bout. It could be an entertaining fight, probably fight of the year for ONE. His style is very aggressive, he pushes forward a lot. I think we have quite similar styles. Also, for an MMA fighter, he is a pretty good boxer.”

Both men would probably need to win next week for that fight to materialize. But Abbasov is hoping to earn himself a second title and if he succeeds then the 28 year old will be able to take his pick of opponents.