Manel Kape has called for his shot at the Rizin bantamweight championship for almost a year and his wish has finally been granted. An injury to Kyoji Horiguchi opened the door for the 26 year old to challenge for the belt.

Kape stormed into contention by scoring back to back second round stoppage wins. He finished Seiichiro Ito at Rizin 15 and then put away Takeya Mizugaki at Rizin 18 to catapult up the list of contenders.

Of course the injury to Horiguchi has expedited the process. But Kape, who faces Kai Asakura at Rizin 20 on New Year’s Eve, has unfinished business with this particular opponent.

At Rizin 10 he dropped a split decision to Asakura. This fight will have much more significance as the title is on the line and both men’s stock has risen since the first encounter. For Kape it promises to be a special moment,

â€œThis fight is very special. I am fighting a guy who has beaten me before. Of course, I want to win this time against him. The stakes are even greater because the belt is on the line. I wanted this shot for a long time, and I have no plans to put it to waste,â€ he stated.

‘Prodigio’, who hails from Portugal and has Angolan heritage, knows he will be the underdog when he faces the Japanese fighter at the Saitama Super Arena,

â€œThankfully, everything in my training camp has gone very well. Itâ€™s a bit more pressure during the final few weeks, but I think Iâ€™ve managed to handle it well. Both mental and physical aspects are now on point. I know I can pull it off,â€ he said. 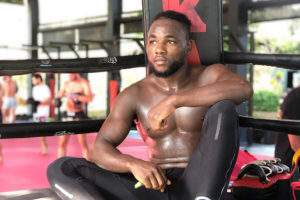 Kape knows that he will not be in for an easy ride, but he has confidence in his ability to handle whatever Asakura throws at him inside the ring on Tuesday,

â€œI know what he can bring as a fighter. He is strong in the stand-up, and he has a good takedown defense. But it doesnâ€™t mean that I donâ€™t see flaws in his style. I am ready for anything that comes my way.â€

Asakura scored a shocking KO of Horiguchi at Rizin 18 and followed it up with another stoppage victory over Ulka Sasaki at Rizin 19. Both these opponents hold victories over Kape.

This will be Kape’s ninth Rizin fight. He knows all about fighting in front of the fans at the Saitama Super Arena and is determined to silence them by winning the vacant belt,

â€œYes, he beat the champion. But he is not the champion yet. We have to fight for it. I am coming for that title. They can cheer me or boo me. At the end of the day, I will do my best to get the job done.â€