A lightweight clash between Nandin Erdene and Hong Young-Gi has been added to the Road FC 55 card. The event is set for Daegu on September 8th.

Erdene (8-6) hails from Mongolia and has fought 12 times for the promotion. At Road FC 51 last December he needed less than a minute to finish Je Woo Yeo.

Young-Gi (5-5) is coming off a second round stoppage loss to Bruno Miranda at Road FC 52. He has spent his entire career competing exclusively for the Korean promotion.

The main event pits newly crowned featherweight champion Lee Jeong-Yeong against undefeated challenger Hae Jin Park. The former will be making the first defence of the title he won at Road FC 50.

For Park (7-0) this will be the first fight in over a year. Lee (6-1) is also coming off a long period of inactivity, he has not fought since November when he stopped Mu Gyeom Choi to win the 145lbs title.

Earlier this month a new middleweight champion was crowned at Road FC 54. Yang Hae-Jun stopped La In-Jae late in the second stanza to become the seventh man to claim the promotion’s 185lbs crown.

At Road FC 53 the previous month Mansour Barnaoui scored a lucrative win over A Sol Kwon. It earned him the lightweight title and a prize of 1 million USD, only the second time a fighter from outside Korea has won one of the promotion’s titles. 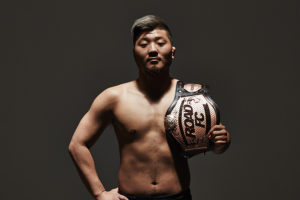 A Sol Kwon swapping MMA for missionary work in Brazil