ARC 2 took place at the at the Hot6ix Colosseum in Seoul this evening. The main event was a rematch but it played out in similar fashion to the first fight.

The catchweight contest between Nandin-Erdene and Kim Se Young started at a furious pace even though the Mongolian had already beaten the Korean at ARC 1 in May. But it had an unfortunate, abrupt ending as the Korean injured himself in the second round.

Kim was the aggressor at the start and Nandin-Erdene was caught off guard. After a couple of shots landed flush during some wild exchanges, the Mongolian backed off and took a more calculated approach.

A left hook dropped Kim midway through the first and he was on the receiving end of some punishing ground and pound. The rest of the round consisted of Nandin-Erdene implementing the jab and counter with efficiency. The second period blasted off and another wild exchange and Kim was soon on his back covering up, trying to utilize some jiujitsu while eating fist after fist. After a five minute break due to a low blow, the two met again in the middle of the cage.

The South Korean threw a right hook and injured his wrist on the side of his opponent’s head and dropped to the ground. Nandin-Erdene swarmed with a flurry of punches and the referee stepped in to stop the fight with 1:54 elapsed in the second stanza.

That makes it back to back knockout victories over the same opponent and a fifth straight win for Nandin-Erdene who improves to 13-6. Meanwhile Kim drops to 6-5 after being beaten by the Mongolian twice in the space of three months. 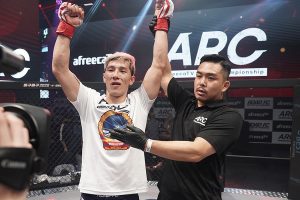 In the co-main event, Shin Dong Guk and Shoiatbek Bazarbaev had the wildest fight of the night.

The exchanges were roughly even on the feet with Bazarbaev connecting with the more solid shots and throwing a greater variety of strikes. While Shin was staggered with a head kick, Bazarbaev got rocked with a solid right hand that had him shooting for a takedown.

The middle frame had the action slow down a notch with much of the round being played out from distance or in the clinch. Again, Bazarbaev out-landed Shin and was more offensive.

In the final round, the Korean fighter rushed forward and pressed his foe against the fence and was able to drag the fight to the ground. After landing some thumping punches from half guard, the ref stood them back up.

For the rest of regulation, both men were sloppy with their strikes as a result of fatigue.

The judges awarded Bazarbaev the split decision and moving his record to 1-1. Meanwhile, Shin loses his last three out of four and drops to 3-3. There were some other standout performances by prospects.

In the knockout of the night, the debutant Choi Sergei (1-0) took on the much more experienced Hwang Chan Hwan (2-5) and dusted him with one punch in the first round.

Also, Team Stun Gun’s Park Si Won (4-0) faced off against dangerous striker Chingun Shinkoiwa (0-1) and weathered the storm to get the submission in the second round. Park has emerged as a talent to watch with his third win in a six-month span.

Last but not least, 15-year-old phenom Shin Yu Jin (2-0) continued her impressive 2020 by knocking out Park Ji Su (1-1) in the first round with a barrage of punches.