Noelle Grandjean has yet to make her ONE Championship debut but the undefeated atomweight is extremely ambitious. Ahead of her fight with Lea Bivins this weekend the judoka makes it clear she already has one eye on the belt,

Grandjean made her MMA debut a year ago and signed for ONE Championship in June. But the 26 year old’s martial arts journey began a long time ago,

“I started judo at the age of 6. My dad took me. It’s funny, I didn’t really like it, actually. But I learned how to love it. I love judo now, and I’m very thankful for everything I got from it, the values and also the physical abilities.”

Grandjean has won national championships in France, Holland and Thailand. She is eligible to represent all three countries and had a very international upbringing,

“I moved to France when I was 9. I moved around a lot, actually, kind of international. I’m also half Thai, so that’s why I’m living in Thailand right now. I’m a three-culture child.”

Having a Thai mother you would think that Grandjean might have gravitated towards Muay Thai at an early age but she didn’t get any encouragement from that side of the family,

“My mom didn’t want me to get hit in the face because I was a girl,” she recalls.

That made judo a natural choice but Grandjean was determined to follow in the footsteps of her dad who holds black belts in judo and karate and has competed extensively in Muay Thai. She knew from an early age she wanted to be a fighter,

“I feel like I’m born for this. Since I was conscious, I have had it in my mind because my dad was also doing it. It’s just like a lifestyle. It’s natural for us. It’s in my blood.”

While her background is predominantly in judo she has also competed in Muay Thai and these days Grandjean is based full time in Thailand. She wants to become more rounded and feels that her current home of Tiger Muay Thai is the perfect place to do that,

“I’ve been working on my striking because obviously, I was more grappling. Being in Thailand helps with this, It’s the place to be.”

She has had a handful of Muay Thai fights and feels that this has made her less dependent upon her judo,

“I hope I’m well-rounded. That’s the goal, to be good everywhere.”

She faces Lea Bivins at ONE on Prime Video 3 this weekend. While Grandjean has more MMA experience than her opponent she has never fought on an event of this scale or magnitude.

She knows it will be a big opportunity and the judoka is determined to grab it with both hands,

“It’s a big step, and I am very honored to fight for ONE. For me, it’s the greatest promotion. I love everything about it. Honestly, I’m very excited about this.” 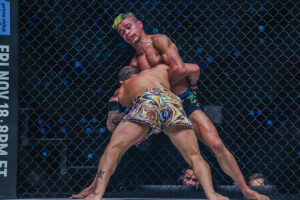