Ritu Phogat is a decorated wrestler. But she probably hasn’t been elbowed in the face many times. That is what Nou Srey Pov is thinking ahead of their atomweight fight at ONE: ‘Inside the Matrix’.

The two come from contrasting backgrounds. The Cambodian has a background in Kun Khmer and also has experience in lethwei while Phogat comes from a family of legendary Indian wrestlers.

Pov is well aware that their fight on Friday will be clash of styles,

“I’ve watched her fights. She is very fast and has dangerous grappling skills and she is full of energy and strong.” 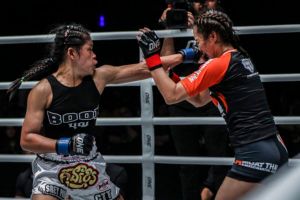 The Cambodian looks set to make one tactical tweak which she believes could make all the difference,

“For my previous fights, I used a lot of my punches but this time I might use my elbow because it is a strong and dangerous weapon.”

However she is well aware of her opponent’s skill set. Phogat will look to take the fight down at some stage and when she does Pov promises to be ready,

“I need to be careful from the opening round and try to escape from those difficult wrestling positions.” 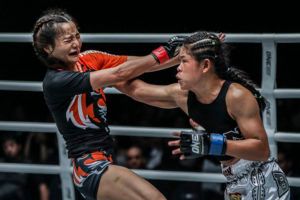 The 25 year old comes from a family of fighters and followed in their footsteps by taking up Kun Khmer which is Cambodia’s answer to Muay Thai,

“I discovered fighting because of my brother, who is also a fighter. I saw him training and I started to watch his fights but it was my father who motivated me to train and fight.”

She was so successful in the sport that it became difficult to find opponents in Cambodia. But Pov persevered and was rewarded with a contract offer from ONE Championship,

“Sometimes I wanted to give up because I had no opponents to fight but I told myself I must accomplish something, and I won’t give up until I do. ONE has helped me to change my life a lot, both in terms of my popularity and my income,” she said. She is competing as a mixed martial artist which has meant learning a completely new skill set. But Pov has reaped the rewards of being a ONE Championship fighter,

“People recognize me a lot more after my debut, and I am also able to earn more money for each fight which means I can keep helping my family,” she said.

Pov’s two fights for the promotion have both gone the distance. She faced Indonesian Priscilla Gaol at ONE: ‘For Honor’ in Jakarta and Thailand’s Rika Ishige at ONE: ‘Clash of Legends’ in Bangkok.

The decision in Bangkok went her way, the decision in Jakarta did not. On Friday Pov will again be facing the local favourite as Phogat is based full time in Singapore. Matchmakers certainly aren’t setting out to make life easy for the Cambodian. But she is happy to do things the hard way and has big ambitions for her ONE Championship career.

Pov still doesn’t know whether she will realize these ambitions or not. But she promises to never stop trying,

“I know it is difficult and I don’t know if I will be able to do it or not. But I will keep trying.”