Ok Rae Yoon had no hesitation in accepting a fight with Eddie Alvarez at short notice. This time last month he was preparing to fight Marat Gafurov at ONE on TNT Part III.

Having won that fight by decision he was promptly handed a matchup against the former UFC and Bellator lightweight champion later in the month. Yoon will face Alvarez at ONE on TNT Part IV and says he was in disbelief when the fight was first offered to him,

Yoon sounds a bit star struck and says he has been following Alvarez’ career for some time,

“Eddie Alvarez is somebody I looked up to from the beginning and I always learned so much from his fights so for me it’s the opportunity of a lifetime.” He has not had much time to prepare specifically for Alvarez but says he is still in peak condition after training for the bout with Gafurov earlier this month,

“Because I just got off the fight with Marat Gafurov I believe that even with short notice my body is fight ready, so I didn’t have to do much more since my body was already ready to compete. It was an opportunity and I decided to take it.”

Having flown to and from Singapore since his last fight and undergone quarantine procedures at both ends Yoon has had a very limited window of opportunity in which to prepare specifically for Alvarez. But he has done his homework on the former UFC champion,

“There’s this specific distance that Eddie Alvarez likes and when he is at that distance he likes to throw the combinations that hurt you. Because he has a strong punch he can damage you, that’s the scary part and he is also very well rounded. He’s good at wrestling, he’s good at grappling, he’s good at everything in MMA.” Yoon has been able to identify one potential chink in his opponent’s armour,

He has already come up with a blueprint that he thinks will enable him to beat Alvarez,

Yoon thinks he knows how the fight will play out and believes Alvarez will shoot for takedowns if he can’t manoeuvre himself into punching range,

“When Eddie has a hard time closing the distance he will shoot for a takedown. So it will start as a striking match but as the fight goes on it will be (about) defending takedowns.” 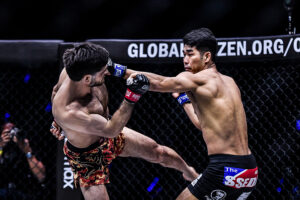 He also had his say on Alvarez’ fight with Iuri Lapicus which was initially ruled a DQ loss for the American before being changed to a no contest,

Yoon’s victory over Gafurov was comparatively free of controversy. He claimed a decision win over the visibly exhausted Russian and says the fight played out more or less the way he thought it would,

“It went according to my plan, the only thing that surprised me was his strength. He was so strong.”

At times during the interview it is easy to forget that Yoon is a fighter, not a fan. He obviously loves the sport and his knowledge of the fight game has helped him prepare as he knows exactly what Alvarez brings to the table.

A bout with a living legend can also bring pressure but Yoon prefers to focus on embracing the opportunity,

“I don’t feel any pressure, it motivates me. Eddie Alvarez is a legend and its the opportunity of a lifetime for me.” 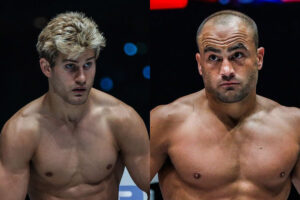