ONE: ‘Century’ preview 3: Clash of the titans

ONE Championship will finish the biggest day in its history with a bang as its evening extravaganza features an 11 bout lineup that includes three world titles contests and a Featherweight Kickboxing Grand Prix final.

The second part of this historic double-header at the iconic Ryogoku Kokugikan in Tokyo, Japan is stacked with a collection of established names and up-and-coming talents who will face off for gold and glory.

Ahead of October 13th, get a sneak peek of what fans and pundits alike can expect to see from some of the athletes on the bill.

Battle of the big boys

Filipino-American superstar Brandon Vera has defeated every opponent that ONE Championship has thrown at him ever since inking an exclusive contract with the promotion in 2014.

Moreover, Vera is the organization’s first and only heavyweight champion since December 2015 when he knocked out Paul Cheng in 26 seconds.

Looking for an opponent who would provide him a tough test inside the cage, the 42-year-old native of Norfolk, Virginia will trim down to challenge Myanmar’s two-division world champion, Aung La Nsang, for the light heavyweight strap.

La Nsang has finished his last five fights via stoppage, including the win that earned him the light heavyweight crow, a 56-second head-kick knockout of Alexandre Machado in February 2018.

Vera may be entering the championship clash with the size and length advantage, but it does not mean that he is the favorite to win.

The heavyweight kingpin has only competed once a year since 2014 and has not gone out of the first round in any of his four matches in ONE Championship.

Meanwhile, ‘The Burmese Python’ has been active since 2014, and is known for his great endurance and durability in matches that allows him to grind his foes down.

Simply put, La Nsang is going to be Vera’s biggest test since his arrival in ONE Championship. The rivalry between Bibiano Fernandes and Kevin Belingon has transformed from what was a basic competition between outstanding combatants into a personal war, and both men have the chance to finally put a definitive closure in their grueling feud on October 13th.

Belingon has faced Fernandes three times before for the bantamweight title and has come out on the wrong side of the result twice, getting disqualified due to an accidental foul when they met in this venue at ONE: ‘A New Era’.

Up until that point there had been a healthy respect between the two men. But Belingon felt Fernandes was play acting and the Brazilian accused the Filipino of having deliberately fouled him.

Like Belingon, Fernandes will seek to put a stamp on the most compelling rivalry in the organization’s eight-year history and leave no doubt about the division’s true king. Ever since 2013, Honorio Banario has dreamed about sharing the cage with Shinya Aoki, who is touted by some as the greatest lightweight in Asian MMA history. He finally gets to tangle with the Japanese legend six years later.

Aoki’s strengths are no secret. ‘Tobikan Judan’ is notorious for his submission game and ability to impose his will on his opponents from the get-go.

Banario knows he is facing one of the sport’s premier submission specialists. The Filipino cannot afford to make a mistake in this matchup and needs to avoid getting taken down and impose his striking game.

Both men have been on the ONE Championship roster since 2012 but Aoki has fared better. The Japanese fighter will be the favourite here and Banario will be looking to pull off the upset. Rodtang Jitmuangnon is ready to do whatever it takes to keep the ONE flyweight belt around his waist as he puts the gold-plated Muay Thai strap on the line for the very first time against Walter Goncalves in Tokyo.

Rodtang won the belt just ten weeks ago. Since then he has defeated Seksan Or Kwanmuang twice in Thailand, demonstrating that he is good enough to take on absolutely anyone in the division.

Goncalves has been training since a very early age and fights out of the Sitsongpeenong camp in Phuket. He’s won titles with Thai promotion MX, who like ONE Championship use MMA style gloves, but faces a huge step up against Rodtang. 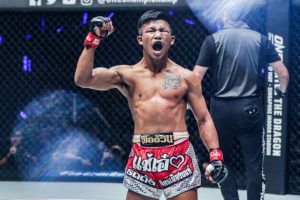 There can only be one

Italian-Armenian kickboxing icon Giorgio Petrosyan is one of the many luminaries to grace  the second part of the ONE: ‘Century’ card. He is set to lock horns with Samy Sana in the ONE Featherweight Kickboxing Grand Prix final.

A unanimous decision win over Petchmorrakot Petchyindeeacademy last July and a huge first-round knockout over Jo Nattawut in the semi-finals a month later punched his ticket to the final. Those performances showcased the 33-year-old’s famous ability to adapt and out-think his adversaries.

On the other hand, Sana shocked the world when he defeated Yodsaenklai Fairtex by unanimous decision this past May. He dispatched Dzhabar Askerov by majority decision in the semi-finals to secure a date with Petrosyan.

Petrosyan is one of the best technicians in kickboxing history. He is a highly intelligent fighter and the challenge for Sana will be to find a way of using his height and reach to overcome this puzzle.

The winner will walk away with $1 million USD and become the undisputed number one in the division. India’s Arjan Bhullar will make his highly-anticipated debut at ONE: ‘Century’ against Italian power-hitter Mauro Cerilli.

The heavyweight clash was originally penciled to happen at ONE: ‘Dawn Of Heroes’ August, but was cancelled when Cerilli failed to meet the medical requirements during the pre-fight checkups.

Bhullar has a decorated background in wrestling. He began his career on the mat at an early age and won a gold medal at the 2010 Commonwealth Games in Delhi before he went on to compete at the 2012 Olympics in London.

After he hung up his wrestling boots, Bhullar made the transition to MMA, where he has excelled with nine wins from his first ten matches. In addition, he had a brief stint under the UFC banner.

Meanwhile, Cerilli is a former Cage Warriors heavyweight champion who challenged for the ONE heavyweight title in his promotional debut.

Cerilli has 13 victories as a professional and is coming off a first round KO against Alain Ngalani. ONE Championship has big ambitions in India and Bhullar will be looking to impose his wrestling and get his career in Asia off to a winning start. 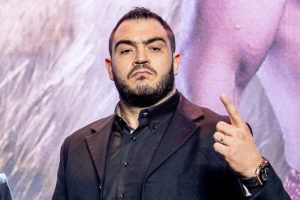 Another title shot could be within Yamaguchi’s reach

Since falling short to capture the women’s atomweight title from Angela Lee in May 2018, Mei Yamaguchi has been on a tear, winning her last three bouts in an exciting fashion.

She’s already beaten Jenny Huang once and will be a strong favourite to do so again. A fourth win would surely be enough to secure the Japanese veteran another crack at that title.

Huang has lost to Angela Lee too, albeit in more decisive fashion. The Taiwanese fighter is primarily a grappler but has spent a lot of time training in Thailand.

Yamaguchi will be looking to put on a big performance in front of the Tokyo fans. Should she win then a call-out out of the morning’s atomweight title fight will surely follow. 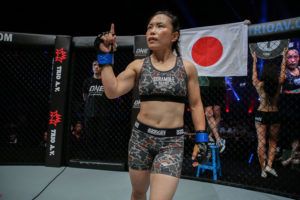