ONE Championship has confirmed two high-profile Muay Thai bouts to headline its upcoming shows on September 11th and 18th.

Pongsiri fought at ONE: â€˜Warriorâ€™s Codeâ€™ in February on just a weekâ€™s notice but ultimately came up short in a featherweight title fight against Petchmorakot. Clancy is the WBC 154lbs champion and will be making his promotional debut.

The card will also be the first ONE Super Series outing for Wondergirl Fairtex‘s younger sister, Supergirl JaroonsakMuayThai who takes on Argentina’s Milagros Lopez at atomweight. The Thai is the youngest fighter on the roster.

A week later, Petchmorrakot PetchyindeeAcdemy will defend his featherweight Muay Thai title against Magnus Anderson. It will be a quick turnaround for the Thai who faces a Swedish newcomer.

Petchmorrakot successfully defended his belt against the legend Yodsanklai Fairtex at ONE: â€˜No Surrenderâ€™ in July. Anderson is the Lion Fight 154lbs champion and also has experience of fighting Muay Thai in the smaller gloves, winning the Mx Muay Extreme 70kgs title last year. 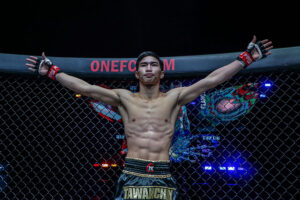