Petchpanomrung Kiatmoo9 made the fourth defense of his featherweight title at Glory 75 in Utrecht on Saturday.

Standing across from him was former champion and current number one contender for the belt, Serhii Adamchuk. The Ukrainian had already lost twice to Petchpanomrung with the most recent loss coming at Glory 63.

Petchpanomrung started quickly, looking to control the pace and range with a fast left jab. Adamchuk got the fight under way with a fast punch combination to head and body.

Petchpanomrung was soon looking in control as he punished the legs of Adamchuk with some stinging low kicks, before switching up and attacking the body more. Midway through the round Petchpanomrung picked up a warning from the referee for spinning Adamchuck off balance to the canvas.

Petchpanomrung just carried on where he left off attacking Adamchuk with solid kicks and some slick punch combinations.

Just before the bell Adamchuk caught one of Petchpanomrung’s kicks and landed with a solid punch while holding his leg, but managed to escape getting a warning from the referee.

Adamchuk started the second more aggressively, coming straight in with a jumping knee. Petchpanomrung soon had things under control again though and was again using his jab well to set up sharp kicks and punch combinations. 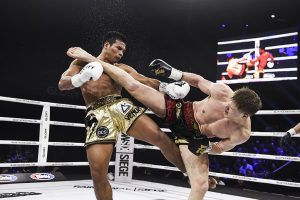 Petchpanomrung continued mixing his kicks up between body and legs and the right side and thigh of Adamchuk were growing redder by the minute.

Adamchuk again started the third round fast, but it was short lived and Petchpanomrung was soon in control again, dictating the pace and landing seemingly at will with hard body kicks.

Adamchuk seemed to be running out of ideas and tried to land an eye catching spinning heel kick, just before the bell, but Petchpanomrung saw it coming and never looked in danger.

In round four the action stayed the same, with Petchpanomrung looking in control from the start, utilizing his jab beautifully to set up his kicks.

Adamchuk tried again with a spectacular looking rolling thunder kick and a few other spinning shots, but they looked desperate and Petchpanomrung had no trouble avoiding them. With a minute to go Petchpanomrung spun Adamchuk off balance again and followed in with a kick, catching the Ukrainian just before he hit the floor.

Petchpanomrung was deducted a point, the only blemish in what was almost a perfect fight. The Thai was in control again in the final round as Adamchuk again looked devoid of a game plan or any ideas to turn things around.

Petchpanomrung continued to punish Adamchuk with hard body kicks before putting on a little show in the last minute, attacking with an axe kick and a spinning heel kick of his own.

At the end there was no surprises with Petchpanomrung winning 49-45 by all five judges at ringside and left everyone watching wondering just who there is out there to give him a real test after this masterful performance.