The finalists of the ONE Featherweight Kickboxing Grand Prix were determined at ONE: ‘Dreams Of Gold’ in Bangkok tonight. Giorgio Petrosyan will face Samy Sana after both triumphed in the semi finals.

Petrosyan, considered by many to be kickboxing’s pound for pound king, gave the audience inside the Impact Arena their money’s worth with a KO win over Jo Nattawut in their rematch.

Petrosyan employed a patient approach from the get-go, landing his shots with the surgical precision while defending every strike that Nattawut threw at him in the opening moments of the bout.

After an unintentional low blow from Nattawut briefly halted the action Petrosyan stepped on the gas pedal. He was moving from different angles to catch the Thai with leg kicks and solid straight hands. 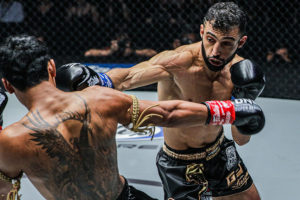 Petrosyan capitalized on a small opening in Nattawut’s high guard, using a right hook to set up a solid left hand that knocked him down. The punch didn’t travel far but it did real damage.

Nattawut failed to answer the count of ten, compelling the referee to wave off the bout and declare Petrosyan the victor via knockout in the first round. The official time was 2:50.

With the victory Petrosyan earns a ticket to the finals of the ONE Featherweight Kickboxing Grand Prix. He will face Sana who needed all three rounds to get past Dzhabar Askerov. 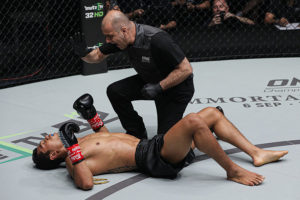 Sana’s height and reach proved to be a problem for Askerov early in the match and the Frenchman had his opponent in trouble with pressure offense, scoring a flash knockdown in the first round.

Although Askerov tried to make it competitive showdown in the second round by stringing together decent combinations and getting some good shots in on the taller Sana, the latter turned up the intensity in the final frame.

Operating behind his length and reach, Sana punished Askerov with blistering punches and stinging kicks, which was enough to earn the nod on all three of the judges’ scorecards.

Petrosyan and Sana are scheduled to collide at ONE: ‘Century’ on October 13th in Tokyo. The winner will walk away with $1 million USD. 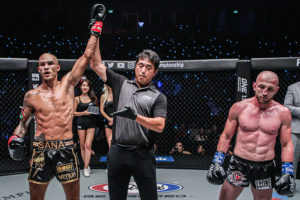 In one of the evening’s co-feature attractions, two-sport titleholder Stamp Fairtex (2-0) proved that she has a special place in the sport of MMA after pulling off a rousing victory over India’s Asha Roka (4-1).

Kickboxing and Muay Thai may have been her bread-and-butter, but it did not hinder Stamp from leaving a lasting impression in her sophomore appearance as an MMA fighter, as she submitted Roka (4-1) with a rear-naked choke in the third round.

Stamp’s foray into ONE Championship’s MMA bracket is no one-off stint as she revealed her intention of going after the women’s atomweight title, which is currently in the possession of Singaporean sensation Angela Lee.