ONE: ‘First Strike’ will have a distinctly Eastern European feel. The kickboxing card features fighters from Armenia, Belarus and Georgia but heavyweight Rade Opacic will be proudly representing Serbia.

He thinks coming from a war-torn country has helped give him the toughness required to be a heavyweight contender,

“We have had many things happen in our country, so we are tough people,” Opacic said. His family has first hand experience of the turmoil in the old Yugoslavia,

“Originally, my family are Serbs from Croatia, where the war was happening. They came to Serbia trying to start a new life, but there was still a lot of struggle,” he explains.

By 1997 the worst of the fighting was over but Opacic says it was still a tough time in his hometown,

“There were many refugees that came to Belgrade and, at that time, it wasn’t so nice here. There wasn’t war, but there was bombing of the city and many, many crazy things.” 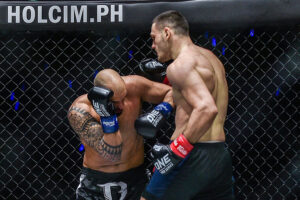 Opacic faces Patrick Schmid this Friday at the Singapore Indoor Stadium. He is proud to be representing Serbia on a global stage,

“I feel very proud that I can represent that on the biggest stage in kickboxing. It gives me extra motivation and extra power to know that I am representing my country at that level.”

Opacic credits his upbringing with giving him the mental strength required to be a top heavyweight contender,

“I think that’s why we are strong people. Because we have survived many tough things, so it’s in our genes to be tough. Whatever is happening, we have to go forward, we don’t just stand aside. It’s built into us, that’s our mentality.”

Opacic thinks that this is a typical Serbian mindset,

“I have that fire and warrior mentality, that’s what I have in me. A lot of Serbians are like that.” 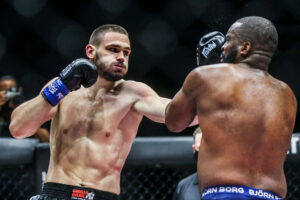 This bout has the makings of a title eliminator. Opacic has won two out of two for ONE Championship and hopes a third win would be enough to earn him a shot at the belt,

“My goal is to win the title in ONE. I know it has to be step-by-step, but that is eventually my goal. It would mean a lot for me, for my people, for Serbia.”

Serbia has produced famous athletes like Novak Djoković and its footballers regularly turn out for top European sides like Manchester United and Real Madrid. For a country with a population of just under 7 million people it is an impressive list and Opacic would like to become the country’s latest success story,

“Serbia is a small country. Me getting to the biggest level in kickboxing means a lot, to prove that even from a small country, you can get to the top of the game. And I have big support from my people to do it.”