Ritu Phogat saw fear in the eyes of Stamp Fairtex when they faced off at ONE: ‘NextGen’ last Friday. The two will meet in the finals of the atomweight Grand Prix next month and, psychologically at least, the Indian feels she has an upper hand,

“I think Stamp is petrified of me because she has seen my outstanding wrestling skills,” she said.

Phogat was preparing to fight Jenelyn Olsim when Stamp was earning her decision win over Julie Mezabarba but she still managed to catch the fight,

“I watched her fight very closely so I know what I need to do in the final. I will do my hard work and nobody can stop me from getting the belt on my shoulder,” she said.

Phogat thinks that Stamp will be worried about her and, in particular, the wrestling skills she has displayed in her MMA career,

“She will not underestimate me because of all that she has seen. I’m going to be even more dangerous, and I’m going to unleash myself on my opponent in the next match.”

Olsim was a last minute replacement for the ill Itsuki Hirata. Many felt it was an easier fight for Phogat but she has a lot of respect for the Filipina,

“I know she is very good so I was not surprised. I prepared and followed my game plan. I was ready for this challenge,” she said. 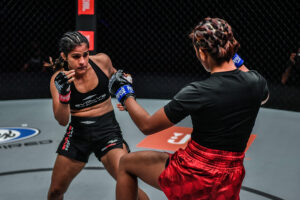 Olsim caught her in a couple of tight spots but Phogat says she was never close to being submitted,

“She tried to armbar and choke me, but it did not feel so hard. I felt like I could escape. Not easily, but I knew I could escape and do my thing.”

However she hinted that there were some areas in need of improvement,

“It was tough but I showed that it’s not easy to pull me down. I am going to go back, review the match, learn from the gaps, and hone my skills accordingly.”

With exactly a month until the final of the atomweight Grand Prix there is limited time for Phogat to learn new skills. But she is happy to be one step closer to establishing herself as the best atomweight in the division,

“I’m going to prove that I deserve to be here, and I’m the best in the atomweight division.”