Ritu Phogat was removed from the atomweight Grand Prix after her split decision defeat to Bi Nguyen at ONE: ‘Dangal’ last month. The tournament was subsequently postponed and the Indian fighter is hoping she might get a second chance.

Being based in Singapore could be an advantage for the Indian fighter once the ONE Championship schedule resumes. She thinks one win could be enough to get her back into the tournament,

“Right now, I am focusing and preparing for my next match. I want to win my next match and book a place in atomweight Grand Prix,” she said. 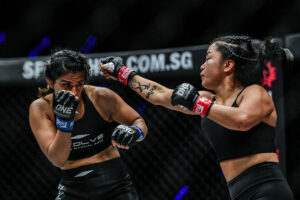 Phogat thinks that winning her next fight, which has not been announced yet, could see her reinstated in the tournament at another atomweight’s expense,

She is still reeling from the split decision defeat to Nguyen. Phogat landed several takedowns in the opening rounds but was unable to capitalize with any sustained ground and pound attacks or submission attempts. 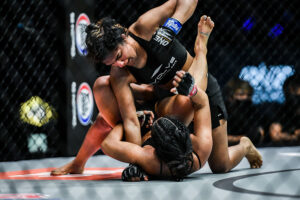 She paid the price for this lack of aggression and is still unhappy about the outcome,

“I gave my 110% in that match. The decision was quite shocking to me because I had dominated the match for two rounds. I was surprised about what had just happened.”

Nguyen came on strong in the final round but Phogat is adamant her opponent did not do enough to win the fight,

“One thing that I know is whoever dominates the fight wins the fight. For two rounds, I did that and didn’t give her any chances to get up. I feel that I should have won that fight.” Given the controversy over the outcome of that fight Phogat is hoping that ONE Championship will order an immediate rematch,

“If anyone has any doubt, I would want a rematch against her and show the world who’s the best.”

The tightened restrictions in Singapore could mean more opportunities for fighters who are based there. Phogat is a member of the fight team at Evolve MMA and is hoping to be back in action as soon as possible.

She is still hoping to rematch Nguyen and get back in the atomweight Grand Prix but regardless of whether these requests are granted the Indian warns she is going to be a different fighter by the time she next steps foot in the circle,